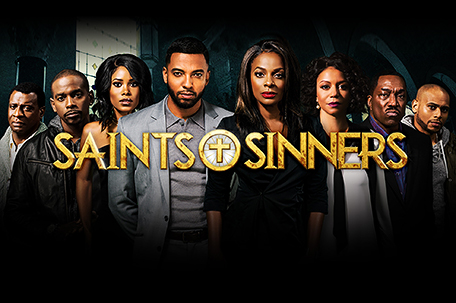 Bounce TV is expanding into hour-long drama programming with “Saints & Sinners,” which will center around the pursuit of power, intertwined with deceit, greed, corruption and murder – all set against the backdrop of a large southern church.

Synopsis: Greater Hope Baptist Church is the heartbeat of Cypress, Georgia a southern town outside Atlanta, which evolved into a city over the years. The church began as a 10-member congregation when the Civil Rights Movement was at its height and being young, black and alone at night was a hazard of circumstance. As times changed, the congregation grew and so did its influence in Cypress. When a violent murder rocks the community, the church that holds the secrets of the entire town is at risk of imploding. For it seems at Greater Hope, only God and the Devil can tell the difference between a saint and a sinner.

The cast of “Saints & Sinners” and the individual roles they play, includes:

– Vanessa Bell Calloway as Lady Ella, a beauty queen with a business mind and the power behind the throne as Pastor Evan Johnson’s wife.

– Clifton Powell plays Rex Fisher, a ruthless local loan shark with his hand in many of the dealings in town.

– Gloria Reuben as the Mayor of Cypress Pamela Clayborne, a hard-nosed former prosecutor whose secrets are catching up to her.

– Christian Keyes as Levi, the prodigal son who returns to his hometown after a successful run on Wall Street.

– Richard Lawson plays the beloved Pastor Evan Johnson who is harboring many dark doings from his faithful believers.

– Jasmine Burke as Dr. Christie Johnson, the daughter and only living child of Pastor and Mrs. Johnson, who tends to local patients but has her own private issues.

– JD Williams portrays Jabari, Levi’s cousin who also works for Rex and is torn between family and business.

“Saints & Sinners” is being produced in partnership with Swirl Film’s Eric Tomosunas (“Undershepard,” “35 and Ticking”).

Bounce TV’s three originally-produced sitcoms “Mann & Wife”, “In The Cut” and “Family Time” all set network records for viewership in 2015.