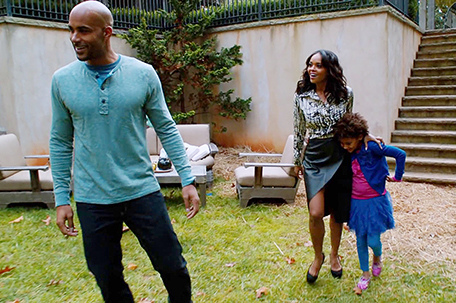 ABOVE PHOTO:  Boris Kodjoe and Sharon Leal  in a scene from Addicted.

From his big screen and television roles to his theatrical and entrepreneurial skills, Boris Kodjoe has proven to be one of Hollywood’s most sought-after talents. He is probably best known for his role as Damon Carter on the TV series “Soul Food.”

He can currently be seen opposite Kevin Hart, Nick Cannon and JB Smoove on another hit sitcom, “The Real Husbands of Hollywood,” and will soon be starring in the upcoming series “Members Only”, which will premiere this fall on ABC. And on the big screen, Kodjoe was recently seen reprising his role as Luther West in the box office hit Resident Evil: Retribution, as well as in Baggage Claim opposite Paula Patton, Derek Luke and Trey Songz.

He was born in Vienna, Austria to Ursula Kodjoe, a psychologist from Germany, and Eric Kodjoe, a physician from Ghana, West Africa. They raised Boris, his brother Patrick and sister Nadja in Germany where he became one of the best tennis players in the country before earning an athletic scholarship to Virginia Commonwealth University.

While studying in Richmond, he was approached by a talent scout for Ford Modeling agency, which he joined after earning his marketing degree in May of 1996. Immediately, he was booked on a dozen campaigns such as Ralph Lauren, Perry Ellis, Yves Saint Laurent, and The GAP. His career skyrocketed as he quickly became one of the most recognizable male supermodels.

Hollywood soon took notice. While studying with acting coach Janet Alhanti, Kodjoe started guest starring on sitcoms such as “For Your Love,” and landed a supporting role in the feature film Love and Basketball. He also starred in Brown Sugar, alongside Taye Diggs and Sanaa Lathan, for which he was nominated for an NAACP Image Award. His other screen credits include Tyler Perry’s Madea’s Family Reunion, The Gospel, Surrogates and Resident Evil: Afterlife.

Onstage, Kodjoe made his Broadway debut in “Cat on a Hot Tin Roof”, opposite James Earl Jones, Phylicia Rashad and Anika Noni Rose. Previously, he toured the country in the play “Whatever She Wants” with Vivica A. Fox and Richard Roundtree.

Kodjoe and his brother Patrick have launched the clothing company ALFA (Affordable Luxury For All), bringing the luxury of custom-made clothing to every man and woman in America at affordable prices. The line can be accessed at www.worldofalfa.com. But his primary personal interest is to raise funds for Sophie’s Voice Foundation (www.sophiesvoicefoundation.org), a charity he started with his wife Nicole Ari Parker in honor of his daughter Sophie, who was diagnosed with spina bifida at birth.

Here, Kodjoe discusses his new movie, Addicted, the screen adaptation of the steamy best-seller by Zane.

Kam Williams: Hi Boris, thanks for another opportunity to interview you.

KW: You know, I recently met Nicole at a charity function here in Princeton after one of her performances of “Antony & Cleopatra.”

KW: That was a lot of fun after having interviewed her several times over the years. She’s even more beautiful and gracious in person. Now, let me ask you about the movie. What interested you in Addicted? Were you already a Zane fan?

BK:  I wasn’t as aware of her before I read the script. That’s when I began to find out more and more about Zane, her tremendous fan base, and all of her books.

KW: How did you like the idea of playing the aggrieved party instead of the hunk the female lead is after?

BK: It was interesting to me, because he went from being a victim to being a protagonist, in a way, once he found out that his wife had been leading this parallel life. So, the character had to deal wiith all kinds of obstacles, and ups-and-downs that I found intriguing.

KW: Tell me a little about what it was like making this movie.

BK:  It was great. It was almost like a family affair. I’ve known [director] Bille Woodruff for years, as well as [fellow cast members] Tyson [Beckford], Sharon [Leal] and everybody. So, it was quite easy to trust my director. My job was basically to make Sharon feel comfortable and protected. She was so courageous and vulnerable, and did such an amazing job. And I was sort of the safety net for her to do all that.

KW: Was there any tension on the set between Zane, the author of the novel, and Bille in terms of their vision for the screen adaptation?

BK:  It’s about communication, weathering the storms, and making sure you really understand each other. In a situation like that, especially where addiction is involved, that lines of communication are open for the spouse not only to understand but to be ready to jump in and help. In the film, you see how difficult it can be because there’s guilt, there’s blame, there’s doubt, and therapy comes into play, as well. And it encourages the audience to engage in conversation after seeing the movie, which is great, too.

KW: You’re really busy on TV nowadays, between “Real Husbands of Hollywood” and “Members Only.”

BK:  Yeah, “Husbands” starts up on October 14th, that’s when Season Three premieres. And I just finished the first episode of “Members Only,” which takes a unique look into contemporary life at a country club, at a lot of scandal and other ridiculousness that transpires there. So, it’s been exciting for me to do both shows, and a diverse selection of work overall.

BK:  No, it worked out perfectly, which things usually do when you relinquish control and give it to God.

KW: Harriet Pakula-Teweles asks: How do you and Nicole balance your busy careers with being the parents of young children?

BK: It’s not about balance. It’s about priorities, and we make family our priority, and everything else sort of falls into place around it. When you do that, you don’t have the stress of trying to make things happen. They happen organically. Our kids are more important to us than any movie or TV show. So, we want to make sure they have what they need, and mostly that’s quality time with us.

BK:  An amazing book I read with my kids about the life of a child with a very rare and severe facial disfigurement, and about how his environment responds to him, and how he makes his life, his community, friends and school. It’s phenomenal. We’re reading it right now. The book is called “Wonder” and the main character’s name is August. http://www.amazon.com/exec/obidos/ASIN/0375869026/ref=nosim/thslfofire-20

KW: The Sanaa Lathan question: What excites you at this point in your career?

BK:  Anything that’s new and different.

BK:  In Vienna, when I was 1 1/2 or 2 years old. I remember it because I remember the little blue raincoat I used to wear, and how the buttons felt. I liked to walk on the street in front of our house when it was raining, and jump into all the puddles. That’s weird, but that’s my earliest memory. I’m going to have to go to therapy to figure out what that means.

BK:  No, I never dealt with fame. It was never a goal of mine to become famous. So, I never projected any goals associated with that. But I did have a bunch of goals I wanted to achieve when I was financially able to do so, but they had nothing to do with fame. When I set goals, they’re more tangible than becoming famous. You don’t build a company or a foundation for fame. By the way, October is Spina Bifida Month, so that’s a big deal for us.

BK:  I had to make a decision about whether it would impact how I felt about trusting people, and I decided I wasn’t going top allow it to impact my outlook on trust, because I believe trust is a choice. And I’ve always given people the benefit of the doubt until they prove me otherwise. So, it just made me stronger in my conviction about that, but it also taught me never to put anything past anyone.

BK:  Just the way I dress. [Laughs] Otherwise, I’m the same person. I don’t put on a face. I’m the same guy every time you see me. I like to laugh, I like to smile, and I don’t take myself too seriously. I can be a goofball. When I come home, the only thing that changes is that I take off the suit and put on tennis shorts and play with the kids.

BK:  I’m always an entrepreneur, but I’d probably be a teacher. I like teaching kids, whether that’s tennis on the courts or history in the classroom.

BK:  Conviction. Belief in yourself. What it really says is that we are willing to weather the storm of multiple failures to achieve a goal. We’re so convinced in the destination that we are able to let go of the reins and give it to God.

BK: When I’m with my family.

KW: The Pastor Alex Kendrick question: What defines who you are?

BK: Abort the mission, and build your own.

KW: Thanks again for the time, Boris, and best of luck with Addicted.

BK: No problem, thank you, Kam.

To see a trailer for Addicted, visit: http://www.lionsgatepublicity.com/theatrical/addicted/