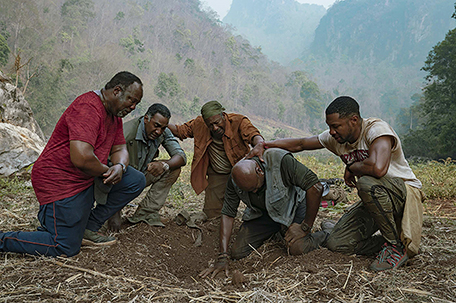 Like many of us during this lengthy COVID quarantine, one of the things I’ve done to keep from going nuts is  channel surf throughout cable networks for entertaining TV shows to enjoy.  And since I’m a movie and TV series lover, I have looked at Netflix often, since it has the most to offer in original programming and old TV shows that I could catch up on.

Honoring the stalwart Black Lives Matter movement — so prevalent now on the heels of nationwide outrage about police brutality against African Americans — Netflix is currently offering a collection of movies, documentaries and shows reflecting the Black experience under a “Black Lives Matter” category.

One film under this category is Academy Award winner Spike Lee’s latest endeavor, “Da 5 Bloods,”  which is about four Black Vietnam vets who had made a pact over 40 years prior to always be there for each other after their service together. Calling themselves “The Bloods,” the men travel back to Vietnam to recover a chest of gold bars that they buried there, find the remains of their friend and squad leader and bring them both back home to the States.

Lee introduces the film with actual historical footage relating to the Vietnam War — first the famous clip of Muhammad Ali revealing his feelings about fighting the Viet Cong, followed by other horrific scenes from the war shown in flashes of vignettes.

In the film, we learn more about the story of these former U.S. Army soldiers  as they meet in Vietnam’s Ho Chi Minh City to recover their squad leader Norman’s remains and a chest of gold bars recovered from a CIA plane that crashed in the fields during their mission years before.  The gold was supposed to be payment to the natives for helping to fight the Viet Cong.  But the Bloods feel more entitled to the gold, so they bury the chest to retrieve it later for themselves.  However, a counter-attack from the Vietnamese leaves the Bloods’ leader Stormin’ Norman dead,  then a napalm strike destroys the area where the Bloods buried the gold, so they can’t find where they buried it.

Fast forward to present day, and the Bloods are happy to see each other again and have fun reminiscing, going to the club and shopping in Ho Chi Minh City – now a far sight more modern than the Bloods remember. They  hire a guide, Vinh, to take them part of the way to the crash site, and discover that a landslide has uncovered the spot where the tail of the plane was, which acts as a marker that will help them find Norman’s remains and the chest of gold bars.

Lee does a good job defining the personalities of the Bloods, which become more intense as the journey increases in danger.  They also get a rude awakening about their friend Paul (Lindo), who after having a simple conflict with a street merchant, exposes a serious PTSD condition where he explodes in anger and takes all his buddies to pull him off the guy.  Lindo, who usually plays controlled characters, delivers possibly his best career performance as the increasingly unstable Paul.  Paul’s son David (Jonathan Majors), unbeknownst to him, has followed him to Vietnam, in hopes for a cut of the gold.  Their relationship is already on shaky ground, and this doesn’t help.  The Bloods allow him to stay, but do not want to give him his own cut from the gold.

As with stories like these, there’s always secrets that come out that drive the plot. Otis (Peters) visits his Vietnamese ex-girlfriend Tiên, only to find out he they had a beautiful bi-racial daughter he didn’t know about.

Eddie (Lewis), who became the most successful of the four after the war —and quick to prove it by ‘treating’ his friends to this and that –- has actually lost the fortune he gained in business, and maxes out one of his last credit cards showing off before coming clean about his financial failures.

The Bloods’ friendship is put through a grueling test, as most friendships are when money is involved.  Paul becomes more paranoid, eventually turning on the people he loves the most and the ones who try to help, namely Hedy (Mélanie Thierry) and her organization LAMB, who clear away the leftover landmines in the countryside fields where the Bloods are searching.  But Paul’s greediness and instability has dire consequences for the group and for himself.

He also has been holding a secret guilt concerning Norman for years, he never revealed to the rest of the Bloods.

Spike Lee delivers a powerful story about friendship, greed, betrayal and reconciliation that keeps you on the edge of your seat.  He also provides a history lesson, as well as insight into the thoughts and feelings of African American Vietnam Vets and how the war affected them.  A two-hour and 34 minute film, you will find the time well spent watching “Da 5 Bloods.”