Over the past year, conversations about racism and sexism have been at the forefront nationwide. Given the precedent set by our current Commander-in-Chief, many feel emboldened to let racist and sexist rhetoric fly freely. Only recently have there been consequences on the other end of what separates freedom of speech from the dangers of hate speech and intolerance. One might question if there is room for open discussion and dialogue about these taboo issues. The satirical film “Bodied,” directed by Joseph Kahn, seeks to tackle some of these topics head on in the realm of a surprising forum… battle rap. Kahn, and two of his lead actors Calum Worthy and Jackie Long made a stop in Philadelphia during their press tour and spoke with the SUN about this complex film.

In “Bodied,” Worthy plays Adam, a Berkeley grad school student, who is intrigued by battle rap. Adam’s motives are questionable from the beginning as it’s revealed that his thesis is on the use of the N-word in rap. Adam quickly forms a bond with legendary battle rapper Ben Grymm, played by Long. Craziness ensues as Adam’s obsession with battle rap catapults him into that world as a battle rapper himself. Worthy spoke about his character Adam.

“Adam’s an anti-hero, almost borderline being a straight up villain,” he said. “He’s a very complex guy… he’s very flawed. It’s almost a Shakespearean theme to his story, because he defends his friends in the rap world for so much of the movie but then ultimately betrays some of them later on. You question the character and his motives and that’s what we want to have this movie do–question what are the real intentions of these characters. So many movies tie everything up in a nice bow and say this is what the character thinks… this movie doesn’t do that. With his thesis, it’s a very controversial thing to try to discuss, and immediately you think this character can’t be a good person. Throughout the film he tries to rationalize it, but by the end of the movie, you’re thinking this doesn’t make a lot of sense. That’s what I love about this project; that the characters aren’t necessarily just one thing or the other. I’m excited to see what the audience has to say about it.”

In addition to the complexity this film presents in terms of subject matter, there was also a great deal of work required to transform the actors into battle rappers.

“One of the biggest parts was learning how to rap” Worthy said. “I was not a good rapper in the beginning of this process. Then I had two months to learn how to rap from some of the greatest battle rappers in the world like Dizaster, Dumbfoundead, Loaded, Hollow, Rone and Kid Twist that you see in the movie. What’s crazy is that you actually have to be in scenes working and acting with people who are some of the greatest battle rappers in the world. It was almost like doing a movie where you play a basketball player, and your costar is Michael Jordan or LeBron James… the greatest of all time. So it definitely makes you work harder because you’re trying to at least pretend to be at their level during those scenes.”

Long echoed Worthy’s sentiment regarding the amount of respect he has for the art form that is battle rap.

“I have worked with the top video directors in the business; one is Joseph Kahn,” Long said. “I’ve worked with Chris Robinson, T.I. and Big Boi on “ATL”. I worked with Brian Barber and OutKast on “Idlewild”. I used to go to the studio and do records with them. I’ve seen what it’s like for them to put things on wax, but battle rap is a whole different story. You’ve got to respect these guys. I don’t think rappers can do what these guys do! Rappers have to write their stuff down. These dudes… I know they probably write it down and do the research, but they’re not in a booth recording and doing it again. They’re doing rebuttals and everything you can imagine in a battle. They’re talking to the crowd, there’s people there where they can get nervous and mess up. Their girls can be there, and someone could talk about their girl. It’s so much that they go through. So, to play that type of role was a blessing beyond. I’m doing something for their culture and luckily enough, we have the greatest, the baddest, top dogs of battle rappers in our movie to help us out. This movie was definitely a challenge for me… the words, the dialogue, the 22 days we shot this movie… but we got it done.” 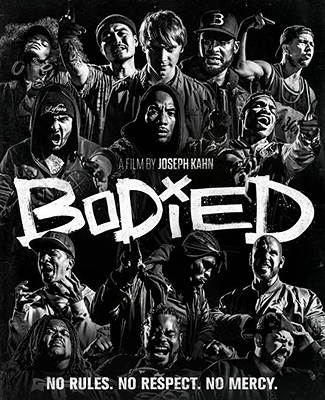 One of the concepts this film addresses is that words have consequences. This begs the question… are there any rules when it comes to rap battles? Long shared his thoughts on the matter.

“It’s battle rap, don’t come to battle if you’re not prepared. Don’t bring your girl to the show, don’t bring your man to the show… anything goes,” he said. “This is a sport where they want to show how smart they are, how quick they are, how witty they are. If you go into the sport, you have to have a strong heart because they’re going in on you and they don’t care. Then after all that nasty, crazy stuff, you’re hanging with them having a drink or smoking weed together like they didn’t just talk about your dead grandfather or something. That’s how deep this is. It’s a crazy sport… I respect these guys.”

The idea that hearing what another person has to say, even when it angers you or you are vehemently opposed to what they are saying, is an idea that sparked the creation of this film. Kahn shared what compelled him to tell this story.

“I’ve seen how social media has changed the way we talk to each other,” he said. “You go online, and people start having arguments. It used to be that people had arguments, but now it’s getting to the point where people just say shut up, stop talking and people trying to get each other fired.We’ve all gotten to a point where it is less about the conversation and more about how we can shut the other person down. But in battle rap, you can’t shut the other person down. You have to sit there and listen to them for three or four minutes, then you get your round. I thought that’s an interesting way of looking at life. It’s a very unusual situation today. We don’t really debate as much as we fight. But at the end of the day, battle rap is debate. Someone has to win, someone has to lose.”

Although ‘Bodied’ addresses several controversial topics including; racism, sexism, cultural appropriation and code switching; Kahn makes it clear that his intention was not to teach the audience anything, but instead to provoke them to think.

“It’s not a moralizing movie on a certain level,” he said. “I feel like most movies when you go into them, the filmmaker is speaking down to the audience like they’re gods, and they give them a lesson about life. The reality is when you look at a lot of these lessons, these are lessons you already know. You already know killing is bad, cheating is bad, you know sexism and racism are bad. So at the end of the day, I don’t feel like you walk away knowing anything new. “Bodied” is specifically a very funny film. It’s a satire, so the point of a satire isn’t really to answer anything but to question in a funny way. That’s what we’re doing… we’re questioning.”

“I think I was trying to demonstrate a certain basic truth about human beings,” Kahn added. “We love to present each other as these perfect human beings in this sort of artificial concept of what a perfect human being supposed to look like. You’re perfectly not racist, perfectly not sexist, you make all the right decisions… that’s an impossible ideal. I don’t think that’s the way human beings work. The reality is we live at stereotypes and jokes because we find differences, interesting and a lot of times when we we are in uncomfortable situations we laugh. A lot of times, it just help[s] your brain in processing the interaction with somebody. I wanted to find where was the line between kind of an insert laughter of a joke when you’re celebrating a difference versus when you become a caustic and you try to go for a kill or coming from a hateful place.”

This film will definitely leave the audience with a lot to think about. Kahn ended the discussion with this final thought.

“I was passionate about “Bodied” because I felt like it was something that I had to say, and not only did I have to say it… I felt like the story I wanted to say had to be done within a certain timeframe,” he said. “If ‘Bodied’ was released five years from now, it would be a very different movie. But the particular movie and statement I want to say about “Bodied” seemed like it had to be made right now, as fast as possible, to hit the target of people’s buttons in 2018.”