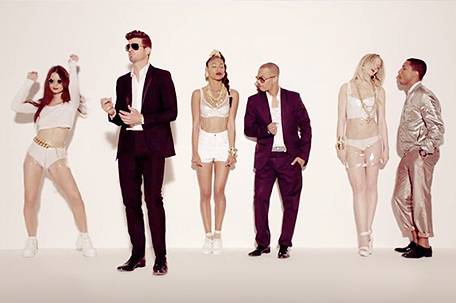 The war may still linger, but Robin Thicke can claim victory in a copyright lawsuit involving the his mega-hit “Blurred Lines.”

According to The Hollywood Reporter, the copyright lawsuit was concluded via a settlement among some of the respective parties involved.

The case created domino effect of sorts when Thicke initially brought in litigation experts ad sought declaratory relief that “Blurred Lines wasn’t an improper version of Marvin Gaye’s “Got to Give It Up.”

Gaye’s children responded to the lawsuit with counterclaims against Thicke and his producers as well as the Sony/ATV-owned EMI April for allegedly breaching its obligations to protect the Gaye catalogue.

The Gaye family’s court papers note how EMI also “administered rights on “Blurred Lines’ and didn’t want Gaye’s family getting in the way of the song’s ongoing success.” So much so that the company’s chairman is said to have “contacted Gaye’s legal representative with warnings about making a frivolous claim.”

Speaking with the Hollywood Reporter, Sony/ATV responded to the Gaye family’s claim by labeling the family’s move to rescind their contractual relationship as something that had been “ill-advised.”

With the copyright lawsuit out of the way, the next step is a settlement agreement between Gaye’s family and Sony/ATV. Under the agreement, Sony/ATV won’t have to defend their impartiality in administering copyrights to both Thicke’s work and Gaye’s, the Reporter mentioned. In addition, the arrangement will free Sony/ATV from having to address what was said to have been a conflict inherent in owning 30 percent of the music publishing market.

At this time, terms of the agreement haven’t been been made public.