Black or White—leaves way too much grey area 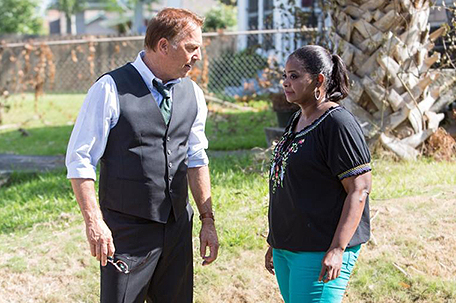 ABOVE PHOTO:  Octavia Spencer and Kevin Costner in a scene from Black or White.

Just when Anthony Mackie was explaining to The Grio, that America is “just tired of being bombarded with race right now,” while discussing Selma’s Ava DuVernay and David Oyelowo’s snub by the Academy Awards, establishment, he ironically stars in an upcoming movie “Black or White” tackling, you guessed it, race issues.

Coming down with a serious case of foot-in-mouth syndrome, the black actor plays Jeremiah Jeffers, a lawyer defending his sister Rowena Jeffers (Octavia Spencer), in a custody battle for granddaughter Eloise, (Jillian Estell) with the child’s maternal white grandfather Elliot Anderson (Kevin Costner).  And if there wasn’t already enough irony for you, he is the main person fighting to make the case racially charged.

Written and directed by Mike Binder, aside from race, this film tackles addiction, the struggles of single parenting, mourning, and the importance of family.  Production wise, there are triumphs with music done by the revered Terence Blanchard, and casting by Sharon Bialy.

Performance wise, it pales in comparison to other roles in each of these actors’ repertoire.  Scenes were overacted and even cringe worthy, as it became uncomfortably awkward to hear some of the forced dialogue.  It was one of those instances where you are faced with laughing to try to cover up the embarrassment you are witnessing.  This made the mild editing missteps more amusing.

Regretably, throughout this story about a beautiful, smart little biracial girl struggling to understand the changes she is forced to endure, we never hear her perspective on the ordeal.  She is ordered to see a counselor during the case, but we never went into a session with her. We do hear minor instances of what she discussed with the therapist, but little more.

Particularly troublesome is that her grandfather (Costner) loses his wife Carol (Jennifer Ehle) and acts as if he’s never known how to parent even though he had Eloise’s mother who also died.  He doesn’t know how to discipline her, and only once or twice in the film does she ever have her hair done instead of the tangled Afro that her ‘Poppa’ sends her to school with everyday, dressing it with a bow.  And the pet name he has for the child, affectionately calling her ‘Puppy’ was just too much.  Having the child bark in some scenes only made matters worse.

This film was highly predictable. There was too much being put into the viewers face in an obvious way leaving little to no room for subtle nuances.  When issues were addressed, it was in a safe way, making it an easier pill to swallow for white audiences.  “Black or White” attempted to get gritty in dealings with Reggie (André Holland), the crack addled father of Eloise, but still came up short.  And the scenes in the courtroom involving Rowena Jeffers and Judge Cummins (Paula Newsome) were beyond overdone.

This film should have been co-written with a black screenwriter to improve the quality.  The upsides are that lawyer Rick Reynolds (Bill Burr) and tutor Duvan Araga (Mpho Koaho) made us laugh throughout, and that this film has beautiful people in it.

Mackie said, “Everybody is shying away from certain topics and certain movies.”  Little did he know he was prophesying his own fate.  The trailer fares much better than the two -hour film.