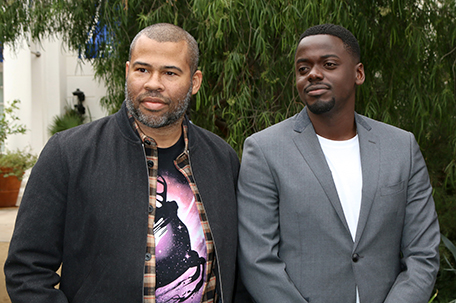 LOS ANGELES — Jordan Peele has been dreaming of his Oscar moment since he was 13, but now that it’s happened, he can hardly believe it.

The 38-year-old received Academy Award nominations last week for best picture, director and original screenplay for his directorial debut, “Get Out.” The star of the horror/satire, Daniel Kaluuya, was also nominated for best actor.

“Get Out” may be Peele’s breakthrough, but the actor, writer, director and producer has been honing his skills for more than a dozen years. He started getting awards notice in 2008, when he shared in an Emmy nomination for a sketch he wrote for MADtv. He was nominated seven more times for his contributions to “Key & Peele,” the hit Comedy Central sketch show he created with Keegan-Michael Key. Peele also co-wrote and co-starred (with Key) in the 2016 action-comedy “Keanu.”

He said having his work recognized by the film academy has given him “faith in my voice.”

“It’s like jet fuel,” Peele said in an interview after last week’s nominations. “It makes me want to make as many movies that I can in my life.”

Peele’s comments have been edited for clarity and brevity.

AP: So how does it feel to be a triple Academy Award nominee?

Peele: Well, I’m not used to hearing yet. It’s a really overwhelming thing to try and process. I’m trying understand how I got here from this time last year not knowing if this movie was going to really work or really not work.

AP: What a difference a year makes.

Peele: I’m definitely feeling the love and feeling with joy and honor of this accomplishment. But it is it has been a bittersweet year knowing that it has not been a great one for everybody.

AP: How was Oscar nominations morning for you?

Peele: I woke up a few minutes after the announcements were made. I was just getting really great texts from just about everybody I’ve ever met. And my (6-month-old) son slept through the night, so that was also huge. So it was like kind of a party at my house… Both he and I with our greatest accomplishments to date on the same morning.

AP: Did you allow yourself to consider this possibility when you were writing sketches for “Key & Peele?”

Peele: I’ve been dreaming about this moment since I was 13. I’ve gone through times where I believed in it and times when I didn’t believe in it. So to have it happen, it comes with a really important lesson and realization for me which is that it’s bigger than me. It’s an important thing for a lot of people and the people who supported the film and the people out there who have the same dream but feel like they can’t do it for whatever reason.

AP: Audiences loved “Get Out,” but does the academy love feel different?

Peele: Yes, it does mean something different. I didn’t know that it would, but now that this has arrived, I’m reminded of when I watched Whoopi Goldberg win her Oscar for “Ghost.” And I remember she sent a message out in her speech that was for me. She said, ‘Don’t let anything stop you. If you want this, if you have a dream, follow that dream and you can achieve it.’ And I’ll always remember that. So hopefully that’s the message that this sends to other young artists of color and women and people who … feel like they’re outsiders and won’t be won’t be allowed into this industry or won’t be accepted. Hopefully they can sort of feel some of that message too.

AP: Is the recognition even sweeter given that this is an unconventional film with a lot to say?

Peele: Making this film, putting it out was very scary. I thought that it was very possible that the world wouldn’t be ready; that they would reject it or that it would not be received. But I knew that I loved it. I knew that it was something that needed to be said. And so the fact that it was scary is kind of how I knew it was important and that was it was my duty as an artist to face that fear and really risk it all.