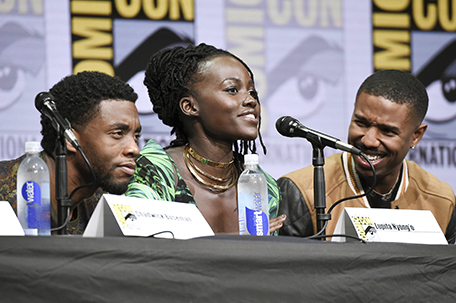 ABOVE PHOTO:  Chadwick Boseman, from left, Lupita Nyong’o, and Michael B. Jordan attend the “Marvel” panel on day 3 of Comic-Con International on Saturday, July 22, 2017, in San Diego. (Photo by Richard Shotwell/Invision/AP)

LOS ANGELES — “Incredible” and “kinetic” are just a few of the loving words that people are using to describe and praise Marvel’s “Black Panther.”

The film from director Ryan Coogler had its first screenings but audiences at the select screenings were able to share non-spoiler reactions on social media.

Los Angeles Times writer Jen Yamato wrote that it is the first Marvel movie about something real.

“‘Black Panther’ is incredible, kinetic, purposeful,” Yamato wrote. “A superhero movie about why representation & identity matters, and how tragic it is when those things are denied to people.”

The film features a largely black cast including Chadwick Boseman, Michael B. Jordan and Lupita Nyong’o. It follows T’Challa (Boseman) after the death of his father, the king of the fictional African nation of Wakanda, and his ascension to the throne.

“I never wanted this movie to end, and as soon as it did I wanted to go back,” tweeted Mashable critic Angie Han. “Solid action, smart story, tons of personality.”

A few called it Marvel’s most political film to date.

Others were more tempered like writer Dave Schilling who says, “‘Black Panther’ is not the best Marvel movie. It’s not the worst Marvel movie. It’s an entertaining movie.” IndieWire critic David Ehrlich wrote that it’s, “Like a Marvel movie but better. The action is predictably awful, but this is the first MCU film that has an actual sense of identity & history & musicality.”