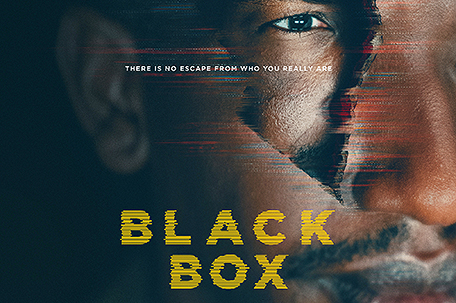 On October 5, a select number of VIP attendees attended the virtual premiere of “Black Box” as part of the “Welcome to the Blumhouse” series.

The event, which included a dj and a live chat, began with a long list of thanks, courtesy of Blumhouse founder Jason Blum.

Directed by Emmanuel Osei-Kuffour Jr., the psychological thriller “Black Box” is a part of a film series being released on Amazon Prime Video under The Blumhouse umbrella.

In the film, Nolan (Mamoudou Athie), a photographer, loses his wife Rachel (Najah Bradley) in a tragic car accident six months earlier. He now suffers from amnesia as a direct result —  a huge challenge while still trying to raise his precocious daughter Ava (Amanda Christine).  The Post-it notes placed around their home as reminders of what goes where, are not serving their purpose.

Although Ava does her best to help him remember names, faces and the things he would normally do as part of their daily routine, it’s just not enough. After a series of strange nightmares, memory lapses and behavior that is completely opposite of the norm —  i.e. waking up to an injured hand and a hole in the wall with no recollection on how it got there —  Nolan decides to listen to the advice of his best friend and physician Gary (Tosin Morohunfola). He also seeks the help of Dr. Lillian Brooks (Phylicia Rashad), a specialist in experimental treatments for neurological disorders.

The film opens with Nolan holding his daughter, as tears of joy stream down his face. It is revealed that the footage is actually a video. Nolan also flips through an old photo album… another attempt to spark a reconnection with his memory. Additional frustration sets in when a potential job opportunity falls through. With great trepidation, Nolan takes a leap of faith and seeks help.

During his first session with Dr. Brooks, it is revealed that Nolan was considered brain dead when he was found unresponsive on the scene of the accident. He remained in a coma for three days, before miraculously waking up.

With the help of technology, and a form of hyper focuse- induced hypnosis, Dr. Brooks hooks Nolan up to a black box device. The device, which is operated by a watch, places Nolan in a “safe room” in his mind. The goal is to revisit past moments in an effort to awaken the pathways to his memories that have become unresponsive.

Dr. Brooks, who appears to be nurturing and gentle, is surprised when Nolan begins to remember odd things that don’t align with his life before the accident. During that session, he goes back to what appears to be his wedding. Nolan becomes unsettled when he sees that all of the faces of the people in attendance are blurry, including his wife.

Additionally, a disfigured, contorted being walking on all fours, attempts to grab him before he snaps back into reality. As the sessions continue, the being becomes more aggressive towards Nolan. Dr. Brooks reminds him that he is in control and that nothing can harm him, as long as he stays in the ‘safe room.’ She urges him to repeat the mantra “I run my mind, it does not run me.”

Nolan’s life begins to spin out of control as the memories intensify and it becomes evident that something much more sinister may be taking place in Nolan’s subconscious and present reality.

The emotional range that each of the actors in the film display, particularly Athie, is outstanding. “Black Box” takes audiences through a myriad of emotions, which include but are not limited to fear, confusion, rage, sorrow, compassion and love. The film not only transports the audience to Nolan’s past — a place filled for uncertainty for the viewer and Nolan simultaneously — it also keeps the viewer on the edge of their seat, waiting for some resolution for the unexplainable.

With nods to “Get Out” and the angst of being stuck in one’s own mind — a “sunken place” of sorts —  the twists are interesting and in line with the creative body of work produced by Blumhouse.

“Black Box” brings into question what defines identity in a way that is both unsettling and intriguing. It is a must see and a reminder that the mind is much more powerful than we think!

“Black Box”  began streaming on Amazon Prime on October 6. Additionally, “Welcome to the Blumhouse” also released “The Lie” on October 6 “Evil Eye” and “Nocturne” will be released on October 13.