Birth of Some Scapegoats 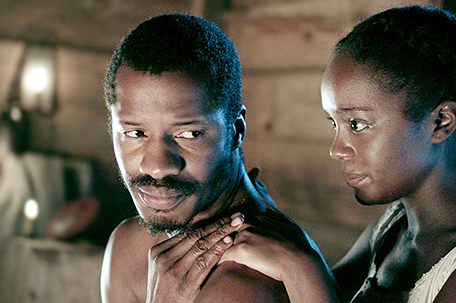 ABOVE PHOTO:  Nate Parker and Aja Naomi King in “The Birth of a Nation.” (© 2016 Twentieth Century Fox Film Corporation All Rights Reserve)

As it is with more than a few things in the African American community, the “blame the Black woman” train for the less than stellar performance of The Birth of A Nation is never late.

I’ve been trying to stay off of social media for most of this week.

Why? Because I’m Black, I’m female, I’m a feminist, and I’m a survivor of sexual assault.

I’m also — according to more than a few Black men — the reason why Nate Parker’s biopic about Nat Turner and the pre-Civil War slave rebellion he led, The Birth of a Nation didn’t do as well as some hoped at the box office this past Indigenous People’s Day weekend.

There are a lot of things that I have learned to count on like, for example, the bloodless efficiency of the Philadelphia Parking Authority…

That Republican Presidential candidate Donald Trump will say something that will make me say, “He’s gotta be punking us!”…

That train, unfortunately, is never late. On social media, Black women have been taking it on the chin for not getting in formation behind this film for a variety of reasons, ranging from hating Black men to not wanting to support Parker because he’s married to a White woman.

(Funny how that didn’t seem to keep us away from 12 Years a Slave, Selma, “Luke Cage” or anything starring Idris Elba. But I digress…)

Having been Black, female and a feminist for 52 years, I know that the temptation to ride the “blame Black women” train is a tempting, and let’s be honest here, an effortless one.

But it would also be the wrong move for a variety of reasons ranging from the wounds that Parker felt hell bent to inflict upon himself to the fact that The Birth of a Nation, well, isn’t all that great a movie.

When the movie first hit Sundance and Fox Searchlight paid $17.5 million for the rights to distribute it a lot of us got really excited. I remember seeing the first trailers for the film and talking with my significant other about the making of this movie — a story about enslaved Africans who at least tried to take on their oppressors, on one of our date nights.

I even went to a panel discussion on the film at the joint convention of the National Association of Black Journalists and the National Association of Hispanic Journalists moderated by TV One’s Roland Martin, and featuring Parker and other members of the cast including “How to Get Away With Murder’s” Aja Naomi King, Aunjanue Ellis of “The Book of Negroes” and Gabrielle Union of “Being Mary Jane.”

Once the words “rape” and “consent” and “sexual assault” entered the discussion, however, I kinda understood why unlike the other movie panels at the convention, this one didn’t include a question and answer session.

Now, I don’t really need to get into the rape allegations that were leveled against Parker and the film’s co-writer Jean McGianni Celestine because they’ve been discussed a lot already. We know that the girl, a fellow classmate at Penn State, was drunk and probably couldn’t say her name, much less give consent. We know that Celestine was convicted of raping her, a conviction that was later overturned.

We know that Parker was exonerated in a court of law in State College, which for some is all that’s needed to change the subject because (a) the young lady in question was White and (b) it’s assumed that he would have been convicted if he were guilty, despite all of the statistical evidence we have that rape convictions are far from certain, even under the best circumstances.

We also know that the young woman in question killed herself because she couldn’t handle what had happened to her.

But what we later found out was that Nate Parker is, for want of a nicer way to put it, a bit of a knucklehead.

And my guess is that his being a bit of a knucklehead figured prominently in why The Birth of a Nation could be perceived as, in the words of Yesha Callahan of “The Root,” “Birth of a Flop.”

Now why do I say that? I say that because there are things you can be defensive about and survive, and things that it’s just in your best interest to apologize and move on from.

When the allegations hit the social media streets (I first read about them via a post on the “What About Our Daughters” Facebook page), survivors of sexual assault were not feeling it, not feeling the movie, and after seeing Parker’s rambling, defensive Facebook posting, not feeling him.

As time went on, he was interviewed by Ebony Magazine, and it seemed like he was at the very least working with a publicist that told him to say that he was young, he was growing, and that he understood consent now better than he did as a 19-year-old collegiate wrestler.

But instead of quitting while he was behind, he kept going. In interview after interview, Parker displayed a tone deafness that kind of hurt to watch. When Anderson Cooper asked him in an interview on “60 Minutes” a week before the film’s release if he felt he owed his accuser’s family an apology, he said no. When “Good Morning America’s” Robin Roberts asked the same question, he kind of snapped at her.

One, you’re not going to win any fight on television with anyone more popular than you. In case Parker hadn’t noticed, everyone loves Cooper and Roberts. Especially Roberts.

And two, you could have avoided all this if you had just did what Oprah told you.

Oprah Winfrey, an early champion of The Birth of a Nation, who just happens to be the most powerful woman in the media not named Shonda Rhimes, tried to set Parker up with her friend “CBS This Morning’s” Gayle King, another champion of the film, for a sit down about the allegations. It’ll solve the problem and you can move on, she said.

Now there are folks in this world that you don’t ignore and Oprah, a woman with her own network, is one of them.

You especially don’t ignore people like her when you’re trying to negotiate the “Court of Public Opinion” because unlike a court of law, being a good lawyer doesn’t help you much. Getting someone on your side that can change the perception of you does.

In Oprah, Parker had access to the “Johnny Cochran” of the Court of Public Opinion, and he blew it like no one I’ve ever seen.

So the boycott that folks promised they were going to mount happened. And it was obviously worked on some level. In fact, Union, herself a survivor of sexual assault, said she understood why folks might want to sit this film out despite being a producer on the film.

(I wonder if the men who are blaming women for the film’s sixth-place finish, most notably TV One’s Roland Martin, are going to come for Union for saying that…)

But while the public relations part of this whole fiasco probably kept folks who understand how painful and life altering sexual assault can be away from the film, it’s not the only thing.

While it did okay on fan-based review sites like Rotten Tomatoes, professional film critics, historians who saw serious diversions from historical fact, and a bunch of people who were hoping for better weren’t so kind.

And I can’t say I blame them really.

I saw the film the Monday before it opened and here’s the best way that I can assess it.

Imagine that you’re packing for a vacation and you’ve put so much in your suitcase that you can’t close it. You take out a whole bunch of stuff, hoping that you didn’t take out anything you might need for your trip. But when you get to your final destination, you find out that you’ve left some important things.

That’s what I think happened with BOAN. The movie clocked in at exactly 2 hours, not nearly enough time to tell a story as dense as Nat Turner’s. Because Fox Searchlight had $17.5 million riding on this, they asked Parker to trim things down.

This movie was at least too short by anywhere from 45 minutes to an hour.

While I totally understand the whole “if we don’t support films like this, Hollywood will stop making them” argument, movies cost anywhere from $12.50 to $20. If I’m not going to go sit through anything from Judd Apatow because it’s not well done, I’m not going to do it for Nate Parker.

So while I can understand why folks might be mad that The Birth of a Nation isn’t doing better, it’s not time for the “Birth of Some Scapegoats.”

It’s time for us to start telling our stories better.