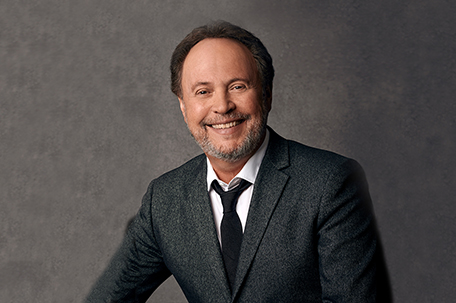 Tony and Emmy Award -winning comedian, actor, producer, writer and director Billy Crystal last week announced additional dates for his upcoming 30+ city US tour “Spend the Night with Billy Crystal.”  Amidst the tour’s initial announcement and following an onslaught of fan demand, Crystal has added two shows in Philadelphia at the Kimmel Center, March 20 and 21.

Tickets for Billy Crystal March 20 and 21 – his only 2 performances in Philadelphia – at Verizon Hall at the Kimmel Center go on-sale to the public on Friday, December 9th at NOON though KimmelCenter.Org, the Kimmel Center Box Office or charge by phone at 215-893-1999. The “Spend the Night with Billy Crystal Tour” is being presented by Larry Magid Entertainment Group.

“This show is unique. There’s stand up, and ‘sit down’ which gives me great freedom to tell stories, show film clips and talk about my life and career and the world as I see it,” said Crystal.  “It’s loose, unpredictable and intimate. The most fun I’ve had on stage in a long time.”

A stand-up comic turned television star, Crystal found fame as a movie funnyman with starring roles in blockbusters such as When Harry Met Sally, City Slickers and Analyze This. He was much loved as the acclaimed nine-time host of the Academy Awards, an achievement topped only by Bob Hope, who hosted the Oscars 19 times. Also an award winning author, Crystal’s latest memoir, “Still Foolin’ ‘Em: Where I’ve Been, Where I’m Going,” and “Where the Hell Are My Keys?” was an instant NY Times best sellers.