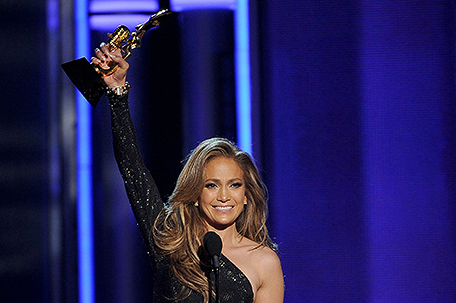 ABOVE PHOTO:  Jennifer Lopez accepts the Icon Award at the Billboard Music Awards at the MGM Grand Garden Arena on Sunday, May 18, 2014, in Las Vegas.  (Photo by Chris Pizzello/Invision/AP)

The King of Pop and a likely successor, prince of pop Justin Timberlake, ruled the Billboard Music Awards – though Jackson made a splash via hologram and Timberlake accepted his awards via video from overseas.

A hologram of Michael Jackson made its debut Sunday, mirroring the late icon’s signature slick dance moves as some members of the audience became emotional, while Timberlake won seven prizes, including top artist and Billboard 200 album, and accepted the honors outside of the country where he was on tour.

Timberlake’s idol was featured in hologram form, and it performed “Slave to the Rhythm,” a song from Jackson’s new posthumous album “Xscape,” along with a plethora of background dancers, beaming lights and fire blasts. It was easily the biggest moment at the awards show at the MGM Grand Garden Arena in Las Vegas.

“We tried to do as best we could what we thought Michael would have loved, and those of us who knew Michael really well, we had a good perspective on it,” Epic Records CEO L.A. Reid said backstage. Reid worked on the album and released it. “But the truth is, you can’t ever really know because he wasn’t there.”

Robin Thicke, who won four awards including top Hot 100 song for “Blurred Lines,” debuted a new song called “Get Her Back,” aiming to win over his actress-wife Paula Patton after they announced in February they were separating. He sang on bended knee and ended with the line: “I gotta get her back tonight.”

“And most importantly I’d like to thank my wife for her love and support and for putting up with me all these years,” Thicke said onstage when he accepted top R&B song.

The night featured a number of collaborative performances, including an explosive duet from Carrie Underwood and Miranda Lambert, while double winner Luke Bryan and Florida Georgia Line were crowd favorites when they performed “This Is How We Roll.” Even Underwood and her hockey player-husband Mike Fisher sang along.

Miley Cyrus performed The Beatles’ “Lucy in the Sky with Diamonds” with Wayne Coyne of the Flaming Lips remotely from the United Kingdom, where she was on tour.

“I have to of course thank all of my amazing fans. … Thank you everybody for making this (expletive) possible – oops. I’m on ABC, sorry,” she said when accepting top streaming artist, sticking out her tongue at the end.

“We wouldn’t be here today if it wasn’t for people that believed in our band, in our small band that started here in Las Vegas from the very beginning,” leader Dan Reynolds told the audience. He then thanked radio, family and management for their support, adding with a yell at the end: “And Billboard!”

Lorde was a double winner, taking home trophies for best new artist and rock song for the ubiquitous hit “Royals.”

“This whole thing started for me with a song that was written when I was 15, which I know everyone knows, but what I want to say is I am 17 and a half now and I’m so thankful,” she said as some of the crowd laughed. “That wasn’t a joke. I’m so thankful that I’ve had the opportunity to learn and grow as a new artist in the spotlight.”

Lorde performed her new hit “Tennis Court” in her signature black – and showcased her signature twitchy dance moves. Other performers included John Legend, who sang his current No. 1 hit “All of Me” on piano, a semi-racy Ariana Grande, a sultry Shakira and Jennifer Lopez, who received the icon award and performed at the beginning and end of the three-hour show.

While musicians dominated the awards show, Kendall Jenner turned some heads when she fumbled over her words – almost pulling a John Travolta – when introducing Australian pop group 5 Seconds of Summer.

“And now we welcome … One …” the 18-year-old reality star said, seeming to almost say One Direction, as she put her head down.