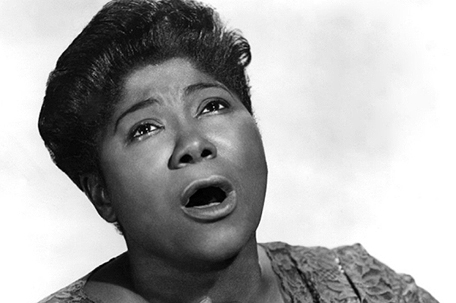 Director Bill Duke confirmed that he is attached to direct and executive produce a feature film on the life of Mahalia Jackson,  therefore will be based on Laurraine Goreau’s  biography “Just Mahalia, Baby,” which chronicles the life of the woman who rose from poverty and obscurity to become the world’s greatest gospel singer.

The project has been a “passion project” for Duke for years and will include many of Jackson’s original music, suggesting that the rights have been secured – something that’s often been a hurdle for films on the lives of musicians.

No word on how far into the production process Duke is maybe the same Mahalia Jackson project Shadow Act mentioned in 2013, which was being developed by screenwriter/director and college professor at Columbia College in Chicago, Vaun Monroe, and Chicago filmmaker Ruth L Ratny, for Joyful Noise, LLC.

Ratny is listed as writer of the film that Duke is now attached to direct.

At the time, the filmmakers, Ratny and Monroe, said that the film would be shot in Chicago and that they were hoping to eventually attract the $20 million in funding that would be necessary to make the kind of film that they believe Jackson deserves, and said that a small percentage of that figure had already been raised.

The film had/has the support of the mayor, civic, business and church leaders.

Now is probably as good a time as any for biopics on the lives of Black public personalities, given Hollywood’s seeming enthusiasm for them in recent years on the big and small screens. That, and also what might be considered a surge in commitment to catering to the significant faith-based market.

A few years ago, Euzhan Palcy was all set to direct a Mahalia Jackson film, with Fantasia Barrino starring – a project that I’d say is likely dead, after Jackson’s family reportedly had second thoughts about Fantasia playing the part.

I should also add that Jackson was most recently featured in the documentary titled Rejoice And Shout, a film covered on Shadow And Act, which the filmmakers called the definitive history of Gospel music, directed by Don McGlynn.

The film traces the history of gospel music from its beginnings on Southern plantations and Baptist churches to national prominence. Featuring a wealth of archival footage of legendary gospel acts such as Mahalia Jackson, Sister Rosetta Tharpe, The Staples Singers, and several others.