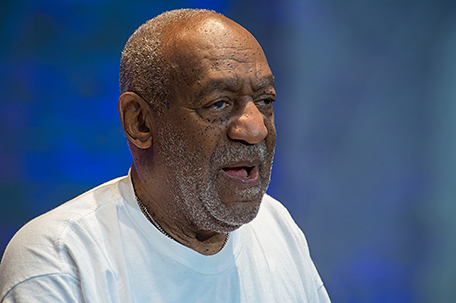 [UPDATE: Cable network TV Land has cancelled reruns of The Cosby Show indefinitely amid sexual assault allegations against Bill Cosby.  NBC has also pulled the plug on development of a new sitcom starring Cosby as the patriarch of a multigenerational comedy series.]

NEW YORK — After Bill Cosby settled a civil lawsuit in 2006 alleging that he’d repeatedly sexually assaulted a woman, his image as America’s dad may have been temporarily tarnished, but was far from destroyed.

But in recent weeks as allegations of other sexual assaults have taken hold in published reports and on social media, his rock-solid persona seems in danger of permanent erosion.  The latest blow to Cosby’s image is 1980s supermodel Janice Dickinson adding her name to the list of women, including Barbara Bowman and Joan Tarshis, who say the legendary comedian assaulted them sexually.  In an exclusive interview with “Entertainment Tonight” and reported by Huffington Post, Dickinson claimed that the alleged incident occurred when the two met to discuss a potential role for her on “The Cosby Show” back in 1982.

“He gave me wine and a pill. The next morning I woke up, and I wasn’t wearing my pajamas, and I remember before I passed out that I had been sexually assaulted by this man,” she said.

Dickinson had previously referenced an uncomfortable encounter with Cosby in her 2002 biography, though she stopped short of accusing him of assault. In Tuesday’s interview, she said that she wanted to make the claims but his lawyers pressured her into keeping them out of the book. In a statement provided to NBC News, Martin Singer, a lawyer for Cosby, disputed that allegation.

“You can confirm with Harper Collins that she never claimed that Mr. Cosby raped her, that no attorney representing Bill Cosby tried to kill the story,” Singer said. “No one tried to prevent anything she wanted to say about Bill Cosby in her book.”

HuffPost reached out to HarperCollins but they declined to comment.

Dickinson said she wanted to reveal her story now to lend credit to the other women who have spoken out recently against Cosby.

“I’m doing this because it’s the right thing to do, and it happened to me, and this is the true story,” she said. “I believe all the other women.”  Soon afterward, Netflix postponed airing his new standup special.

“It’s not like, if you have goodwill, you can borrow against that,” says Eric B. Dezenhall, a Washington-based crisis management consultant. “And if your goal is to get everybody to un-remember what they just heard – well, that’s just not doable.”

Cosby, 77, has never been charged with a crime and so far has steadfastly refused to address the uproar. He’s granted few in-person interviews to media. And an attempt to put out the fire with a positive social media buzz backfired, generating criticism rather than praise.

There is no sign that his silent treatment – outside of a statement from his attorney Sunday characterizing the accusations as “discredited” – will placate the two accusers who have recently told their stories or outlast their demands that he answer to their claims.

His staunchest fans have dismissed the assault accusations that have dogged him for years while they overlooked his admissions of marital infidelity. For them, his image remains snugly aligned with that of Cliff Huxtable, the gentle, all-knowing husband and father he played on “The Cosby Show” as a champion of family values who, 20 years earlier, broke TV’s color barrier with his 1960s series “I Spy.”

UK’s Daily Mail reported ‘The View’ star Whoopi Goldberg mentioned wanting Bowman on the show for added questions because she was skeptical about her claims of rape and why she didn’t report it to the police.  ‘Perhaps the police might have believed it. Or the hospital. Don’t you do a kit when you say someone has raped you?’ Goldberg queried.

‘But there was a settlement,’ co-host Rosie O’Donnell said. ‘So that’s the thing that’s curious.’

But Bowman said she didn’t tell anyone, including the police, about the alleged sexual assault for years because she believed that Cosby was too famous and too powerful for anyone to take her seriously.

“We love the concept of hypocrisy, whether it’s true or not,” says Dezenhall, who recently published the book “Glass Jaw – A Manifesto for Defending Fragile Reputations in an Age of Instant Scandal.” “We love learning that somebody in reality may be the opposite of what they seem. … The squeakier-clean your reputation, the more the public embraces these stories.”

For older Cosby fans, Cosby undisputedly is “a venerated figure who stands for education and achievement and common sense,” says NPR television critic Eric Deggans, who has reported on the accusations. “But there’s an entire generation for whom his projects are distant memories with distant impact. And in later years, he has gone around demanding that poor black people pull themselves up by their bootstraps, get their house in order.”

Cosby’s blunt call for personal responsibility has often stigmatized him in young eyes not as America’s dad but as America’s cranky granddad “taking aim at youth culture,” Deggans says.

It was this sort of attitude that may have prompted standup comedian Hannibal Buress to take aim at Cosby last month in Philadelphia where, during a performance, Buress mocked him, chiding the audience to “pull your pants up, black people, I was on TV in the ‘80s,” and labeling Cosby “a rapist.” (Buress has not responded to repeated requests from The Associated Press to discuss that performance.)

The sequence was captured on video and may have served as a major flashpoint. Barbara Bowman, who since 2006 has publicly accused Cosby of sexually assaulting her, gave Buress credit for bringing her long-voiced words new urgency in a Nov. 13 WashingtonPost.com column, whose headline asked, “Why did it take 30 years for people to believe my story?”

Accusations from Cosby’s past may also have been rekindled by their very absence from a new book, “Cosby: His Life and Times,” an affirmative biography that makes no mention of those allegations. Author Mark Whitaker did not respond to a request for comment.

The firestorm against Cosby has flared as he was enjoying a revival that began a year ago when a standup TV special – his first in three decades – aired on Comedy Central.

“There’s a gap,” Cosby told the AP a few days before its Nov. 23 premiere, “between people knowing what I do and really believing that I still do that – and wondering what it is I really do.”

Titled “Far From Finished,” the program seemed to bridge that gap, attracting a robust 2 million viewers on the youth-skewing network.

Meanwhile, Cosby’s busy standup schedule (he has at least 35 performances scheduled throughout the U.S. and Canada through May of 2015) so far seems untouched by the rising controversy.

Attempting to ride out the storm may not work. But what’s the alternative?

As Dezenhall points out, gone are the days before social media when a public figure in a jam could sit down with Oprah Winfrey or Barbara Walters for a tell-all TV interview where he bared his soul and gained forgiveness from the masses.

“In the current culture, no matter what you do to defend yourself in one of these high-profile media vortexes, it generates multiple waves of new and negative coverage. Cosby has got to be thinking, `Is the better of my very bad options to remain silent?’”