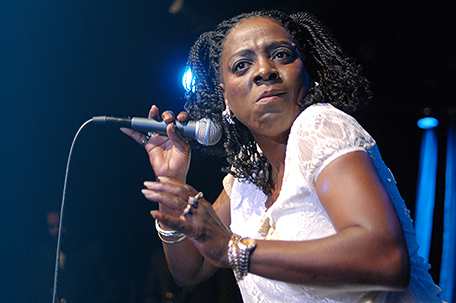 NEW YORK — Sharon Jones, the stout powerhouse who shepherded a soul revival despite not finding stardom until middle age, has died. She was 60.

Jones’ representative, Judy Miller Silverman, said Jones died Friday at a Cooperstown, New York, hospital after battling pancreatic cancer. Loved ones and members of her retro-soul band, the Dap-Kings, were among those surrounding her, Silverman said.

The story of Jones’ battle with cancer, first diagnosed in 2013, was told in Barbara Kopple’s documentary, “Miss Sharon Jones!” released earlier this year. Though she triumphantly returned to the stage in 2015 after the cancer went into remission, Jones late last year announced its return. Still, Jones mounted another comeback with the defiant single “I’m Still Here” and hit the road again this summer with the Dap-Kings even while undergoing chemotherapy.

“You got to be brave,” a debilitated Jones told the Associated Press in July , in between tour stops. “I want to use the time that I have. I don’t want to spend it all laid up, wishing I had done that gig.”

Jones’ death was immediately noted on social media and throughout the music industry. The British producer Mark Ronson, who brought the Dap-Kings in to play backing band to Amy Winehouse on her breakthrough album, “Back to Black,” said, “Sharon Jones had one of the most magnificent, gut-wrenching voices of anyone in recent time.”

The youngest of six children, Sharon Lafaye Jones was born on May 4, 1956, in Augusta, Georgia. Her family lived in nearby North Augusta, South Carolina, across the Savannah River from the birthplace of James Brown. Jones, who would grow into a dynamic, show-stopping performer, grew up idolizing the Godfather of Soul and would later be frequently tagged as “the female James Brown.”

But for decades, such a fate was unimaginable. On “I’m Still Here,” she sings of being turned down by music executives for being “too short, too fat, too black and too old.” 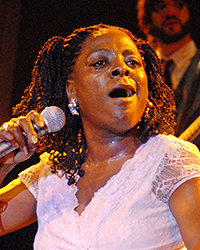 After growing up in Brooklyn (her mother moved to escape an abusive husband), Jones regularly sang gospel at her church, performed for years in a wedding band and sang back-up for various session bands. To make ends meet, she worked as a corrections officer at the Rikers Island jail complex and was a bank security guard.

But in one recording session, she caught the attention of Gabriel Roth and Philip Lehman. The two, blown away by Jones’ fiery voice, made her the lead singer of their newly formed Dap-Kings and launched the Bushwick, Brooklyn-based label, Daptone Records, around her unlikely star power.

They debuted with 2002’s “Dap-Dippin’ With Sharon Jones and The Dap-Kings,” released when Jones was 46. Three more albums followed in the ensuing decade, and two compilations. Standouts included a soulful rendition of Woody Guthrie’s “This Land Is Your Land” and the single “100 Days, 100 Nights,” in which she belts: “100 days, 100 nights to know a man’s heart/ And a little more, before, he knows his own.”

The sound, backed by walls of horns and tightly guided by bandleader Roth, was propelled by Jones’ grit and ferocity. For her, soul and survival went hand in hand. Her torrid performances began, like Brown’s, with a prolonged introduction from her bandmates.

Jones never disparaged the better-selling British soul revival led by Ronson and Winehouse that coincided with her rise. But she wasn’t shy about claiming to be the more genuine article.

“We’ve been there, and we’re still doin’ this,” Jones told New York magazine in 2010. “In another few years, what are they gonna be doin’?”

Their sixth album, “Give the People What They Want” earned Jones her first Grammy nomination for best R&B album. Their last album, “It’s a Holiday Soul Party,” was released last year.

Kopple witnessed the charismatic Jones light up hospital wards while undergoing chemo. “When people are around or there’s an audience, that gives her fuel and she forgets her pain,” the director said ahead of the release of “Miss Sharon Jones!”

Even while suffering the effects of her cancer and its treatments, the workmanlike Jones toured relentlessly

“It’s therapy,” Jones said of performing in July. “I know I need rest and sleep. But I want to work and that is our job.”

The show goes on for cancer-stricken Sharon Jones