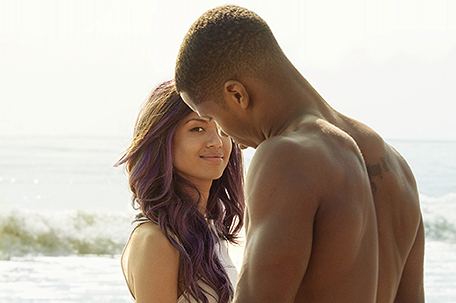 Gina Prince Bythewood has been missed in the love story genre since her timeless classic romance on the hardwood, Love and Basketball.  She proves that she hasn’t lost her touch in the relativity flick Beyond the Lights.

Noni Jean (Gugu Mbatha-Raw, Belle) is an up-and-coming vixen in the music industry—dripping with sex and a nice set of pipes to match.  Born and bred in London by single white mother Macy (Minnie Driver) who will accept nothing but the best from her daughter, she stops at nothing to make sure her debut album is a sure success, including exploiting her child.

We learn early on that Noni is not happy in the industry or with her life as a whole, and attempts a drunken suicide.  Security guard Kaz (Nate Parker, Red Tails) comes to her rescue by assuring her he ‘sees her.’  She is given a second chance at life through this ambitious young policeman, and soon a love affair ensues.

Of course, there is plenty conflict as both fight for their love and differing careers, battling ex-boyfriends and overbearing parents along the way.  Noni regains her strength and a sense of normalcy through this young man, but he doesn’t know if he can be there to pick up her pieces once more.

Some things that left a question were certain camera angles and shots edited into the piece that should have been left on the editing floor.  Those minor details do not take away from the power of the storyline, the screenplay itself that was also penned by Bythewood, an outstanding music score, and the overall themes of relationships and love.

The most interesting relationship to me was the mother-daughter story of Minnie Driver and Gugu Mbatha-Raw.  They were both so believable in their respective roles as mother/boss and daughter/pop star client.  The conflict the relationship experienced was underlying in the beginning, but as soon as Noni finds the voice that she has desperately been seeking, she gains enough confidence to stand up to her mother and the record label that wants to control her image.

Her mother explains that raising a biracial child with no help was no cakewalk, but she did what she had to do, and the nurturing relationship lacks because she is constantly making sure her daughter is not another mediocre star.  There are a few soft motherly moments we see, but ultimately it seems as if her mother cannot shake the businesswoman mentality.

This film covers a lot of ground on which the audience must stand.  It is one of those films that if you don’t enjoy crowd commentary, you should go during a Sunday matinee because it will get reactions.