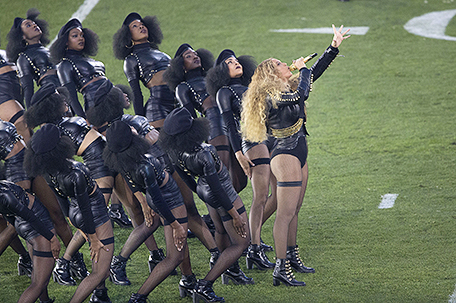 The Super Bowl—the game between the Carolina Panthers and the Denver Broncos—was big. But the Prequel To The Super Bowl—the surprise video release of Beyoncé’s new single “Formation” and the video that went with it, was even bigger.  Maybe you were able to catch both events, as her loyal Bey Hive blew up the world wide web informing the masses that Queen Bey says we must ‘slay,’ or own our self-confidence.

First, let me break down the video for “Formation”.  I loved the design and the concept behind it—so very Louisiana.  From the costumes to the fleur de lis there was all sorts of N’awlins flavor taking over this video.  Even in the intro and interlude New Orleans bounce artists Big Freedia and the late Messy Mya were featured, the Pelican State had a shining light on it.

“Formation” director Melina Matsoukas used a sleek, sexy approach to the layout of the video and the incorporation of antique-esque video footage was well used.  There is a bit of controversy swirling behind footage taken from Abteen Bagheri’s documentary on New Orleans Bounce Music That B.E.A.T. Bagheri claims that the use of the footage wasn’t authorized, but Yvette Noel-Schure, a representative for Beyoncé, told The New York Times everything was legally obtained. 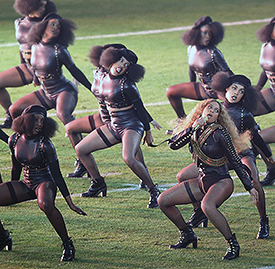 Many are calling this video a success for the #BlackLivesMatter movement and that’s for good reason. It premiered a day before what would have been Sandra Bland’s 29th birthday and a day after what would have been Trayvon Martin’s 21st.  Portions of the video feature scenes of resistance from police, which further echo the message. And if that message went over your head, the Black empowerment is sprinkled throughout the lyrics “I like my baby heir with baby hair and Afros/I like my Negro nose with Jackson Five nostrils” and admits that she’s not too Hollywood to carry hot sauce in her bag.

With the buzz from the video as background, Beyoncé entered Levi’s Stadium in Santa Clara, California with an all-Black female ensemble of musicians and dancers decked out in Afros and black berets as a nod to the Bay Area’s Black Panther Party, which celebrates it’s 50th anniversary this year. The dancers aligned in formation forming an arrow at one point and an X possibly signifying Malcolm X as he was murdered 51 years ago February 21st.  All in all, there were plenty of salutes to black power and black empowerment alike.

My first thought on the experience was “damn, Beyonce’s camp is a marketing genius!”  Just think about it for a moment: she drops the video for “Formation”, which gets people excited for her new music, she then gets the fans even more hyped with her performance during the Super Bowl, but after that, she drops the bomb of “The Formation Tour”, which comes to Philadelphia’s Lincoln Financial Field on June 5.

But while I don’t knock Beyonce’s hustle, falling into the belief that her “Formation” represents her “BLACK!” phase is going to take more than the revelation that Queen Bey carries hot sauce in her purse.

Personally, my experience with Beyonce over the years has been rather lackluster.  In fact, it’s led to those closest to me calling me a “hater” on occasion. Like I said, I don’t knock her hustle because we live in a capitalist society, but it’s a bit disheartening to me that it took so long for her to want to sprinkle some of her Black Girl Magic on the masses. Her Black fan base has needed this kind of empowering message from her before this, so the question becomes, why now?

If ticket prices for the “Formation” tour are any indication, it’s because “the best revenge is your paper”. Black Power in this case is going to get her paid, thus it’s convenient for her to espouse now.

It was also pretty funny to me that her dancers donned Afros during the Super Bowl halftime performance, yet she had a luxurious golden blond weave sewn into her head.  So while she doesn’t seem to mind her baby with an Afro, Beyonce herself isn’t going that route.

The message is mixed here.  She wants blacks to be happy with what they have, yet ultimately, she is going to remain high on the hog and possibly add the hot sauce from her purse.  I find the juxtaposition odd.

There are so many reasons to exclaim “finally Beyonce!” to her latest endeavors, but after the smoke fades, there are still Black people being slain by police, poisoned by the water and the food they consume, and self-hate spread throughout America.  While I understand it is not solely Mrs. Carter’s responsibility to save the Negros, she should’ve been outraged and disgusted right along with us before she figured out how to make a dollar off of it. 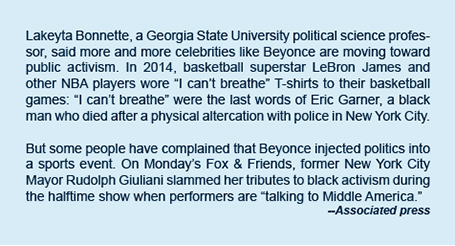 What a Game! Super Bowl XLVII was to definitely one to remember