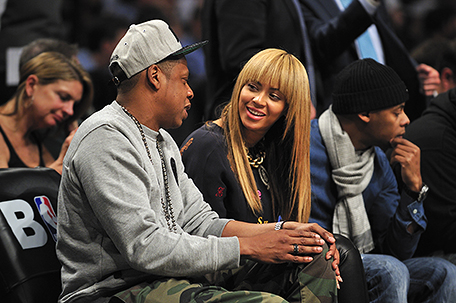 ABOVE PHOTO:  Beyonce and Jay-Z, who was the co-owner of Brooklyn Nets, at court side of Brooklyn Nets vs New York Knicks game at Barclays Center.  (Photo:  Photography T/Shutterstock)

There are multiple reports that Beyonce and Jay Z are planning to announce their separation following their current “On the Run” Tour.

The power couple have been subject to ongoing divorce rumors since Jay’s infamous elevator incident in May and while sources close to the couple initially denied claims of marital woes, rumors are stating that a separation announcement is imminent, even though the couple themselves haven’t alluded to any troubles.

“They are trying to figure out a way to split without divorcing … This is a huge concert tour and they’ve already gotten most of the money from the promoters up front,” a source told the New York Post’s Page Six.

“There are no rings, if you haven’t noticed,” the alleged insider added.

British tabloid The Mirror is also reporting that Bey and Jay are planning a trial separation after they were unable to resolve their issues through counseling, but do not want to go ahead with a divorce.

According to The Mirror, the couple thought that having their first child, Blue Ivy, would bring them closer together but they soon drifted apart again and couldn’t bring back the original spark.

Last week, Beyonce posted a pic with her husband and daughter on Instagram.