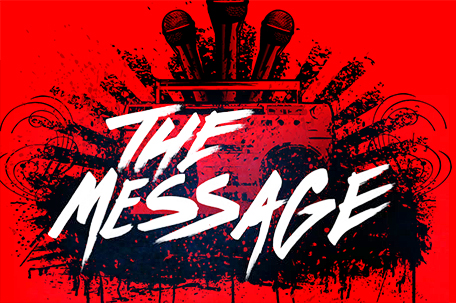 New York–BET Networks launches The Message, a provocative documentary showcasing the influence of hip hop and how its sheer power has changed the sociopolitical landscape of America as well as the world. The four-part narrative explores the factors behind its longevity and covers more than 40 years of this uniquely urban voice born in the streets of the South Bronx. The Message examines the digital boom that transformed the sound, face and business of hip hop over the last 15 years and explores the expansion of the genre throughout the U.S, and the impact each region had on its collective voice. The Message premieres on BET Networks on Wednesday, June 4, at 10 pm ET, followed by new episodes each Wednesday throughout the month.

“Hip hop is a seed planted and nourished amongst the ‘broken glass everywhere’ of mid-70s New York. It has grown to be a worldwide phenomenon and the dominant culture of at least one generation,” said Stephen Hill, president of Music Programing and Specials, BET Networks. “This exciting series examines the origin and the path of the music and message, taking care to objectively analyze its factions and movements.”

The Message will be broken down into four one-hour episodes:

Episode 1 – The Birth and Proliferation of Hip Hop – The premiere episode traces the roots of hip hop, from its birth in New York and spread to California with limited support from the mainstream media. Watch your favorite rappers reminisce on the first time they heard hip hop and be transported to the block parties, DJ Kool Herc’s sound system and the infectious rhymes of the Universal Zulu Nation and Grandmaster Flash. Premieres June 4 at 10 pm

Episode 2 – Trials and Tribulations – Will hip hop be able to grow up in a world that is no longer just about peace, love, unity and having fun? Hip hop faces its first roadblocks, with violent realities and extreme opposition from those who disagree with its messaging. Meanwhile, a new voice begins to form. Premieres June 11 at 10 pm

Episode 3 – Women, Cash, Clothes – Hip hop explores a new reality of lasciviousness, wealth and entrepreneurship characterized by fast cars, big jewelry, the birth of the video vixen and the start of popular clothing lines such as Rocawear, Sean Jean and Wu Wear. Premieres June 18 at 10 pm

Episode 4 – The Digital Revolution – The Internet creates new opportunities for hip hop to change the face of America. From the rise of the first major Internet superstar rapper Soulja Boy to the infamous 360 deals, this episode looks to the future of hip hop. Premieres June 25 at 10 pm.