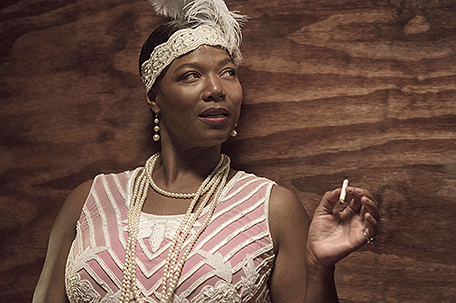 Until the end, HBO’s “Bessie” is an intriguing tale of a complicated woman

If anyone had a right to sing the blues, it would be the “Empress of the Blues” Bessie Smith.

From a childhood with a sister that blamed her for her mother’s death to a husband who ultimately took everything that mattered to her, to the paranoia that sometimes marked her relationships, Smith’s messy, complicated life proved to be stuff that the Blues are made of.

With a cast that includes Queen Latifah in the title role, Michael K. Williams, Khandi Alexander, Tika Sumpter, Mike Epps, and Oscar-winner Mo’Nique, the movie takes you through the lives and loves of a woman whose search for emotional security went largely incomplete.

You’re hit with that reality practically from the moment you’re introduced to Smith. She winds up cutting a man who is trying to rape her with a piece of glass, something that brings back memories of a childhood that includes her sister Viola (Khandi Alexander) who cut her as a child.

(She also locked the refrigerators and kept the key around her neck on a chain. That probably played a large part in Smith’s voracious appetite for a variety of things including the companionship of both men and women, food and corn liquor.)

Smith then meets Ma Rainey (Mo’Nique) who gives her the chance to not only learn about performance, but also about business, and Jack, (Michael K. Williams), the man who would become her husband and the source of a lot of her pain.

I would have liked to see a little more of a focus on how Smith got to the place she was, like, for example, how her mother died, how it effected her, and what part it played in some of the decisions she ultimately made.

There were a lot of things that I learned about Smith through this movie. I learned that nothing was going to stop her from performing, including a visit from the Ku Klux Klan. I learned that toward the end of her life she had performed with both Benny Goodman and Billie Holiday.

The movie went into near total depth about the fact that almost all of Smith’s relationships were with people who were in some way on her payroll, her fluid sexuality, and how a combination of confidence and ego and naivety sometimes cost her relationships with those she loved most.

But what this biopic didn’t take much time on was her death. Smith died of complications from a car accident that resulted from her not being able to be taken to a White hospital for treatment. The movie never mentions it and considering the scene where she tells the Klan to get to stepping, it’s a miss.

The cast, which also includes Charles S. Dutton and Tory Kittles, is very good. Queen Latifah does a masterful job as Smith, and kind of makes you hope that someday she’ll be part of a musical theater company. She can actually sing, something that’s necessary here.

Alexander, who is better known these days as the glamorously dangerous Maya Pope on “Scandal” brings a little bit of that menace to her role as Viola. But as she watches her sister’s rise to fame, she softens her attitude toward her.

While he’ll always be Omar from “The Wire” to me, Williams does a good job as a really not-so-nice man…something that concerns me about his being typecast.

Even Epps, who generally annoys me, is good in the role of Richard, the bootlegger who wants to give Bessie his heart…and a really nice pair of emerald earrings.

As biopics go, “Bessie” is good enough to make you want to learn more about this intriguing woman and the music she made famous.

But because of what it leaves out, it’s only good where it could have been great.