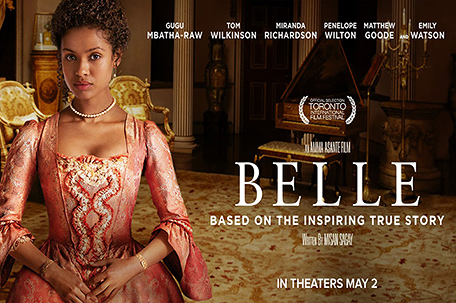 Born in the West Indies in 1761, Dido Belle (Gugu Mbatha-Raw) was the product of the taboo union of Mary Belle, an African slave, and John Lindsay (Matthew Goode), a British ship captain. Upon Mary’s death, the concerned father brought his 8 year-old daughter to England to see whether his well-heeled aunt and uncle might be willing to take her in.

After all, Lady (Emily Watson) and Lord Mansfield (Tom Wilkinson) had just adopted another niece whose own mom had passed away. Plus, since Dido and Elizabeth (Sarah Gadon) were about the same age, the orphaned girls could conceivably keep each other company.

Captain Lindsay further argued that his daughter was entitled to live on the family estate by virtue of her noble birthright. This prompted a skeptical Lady Mansfield to speculate about whether skin color ranked above or below bloodline in polite society.

Ultimately, she did agree to raise Dido, and the young cousins proceeded to forge a close friendship that would last a lifetime. In fact, proof of their enduring bond would be preserved for posterity in a striking portrait of the pair commissioned in 1779.

That famous painting apparently served as the source of inspiration for Belle, a mesmerizing biopic based on a speculative script by Misan Sagay. Directed by Amma Assante, the riveting historical drama continues the recent cinematic trend of reexamining race from the black perspective, ala Django Unchained, The Retrieval and Oscar-winner 12 Years a Slave.

Here, the picture focuses primarily on Dido and Elizabeth’s coming-of-age against the backdrop of a country increasingly uneasy about its involvement in the slave trade. After being fairly protected during childhood, racism rears its ugly head when the boy-crazy girls start entertaining the overtures of appropriate suitors outside the safe confines of the family manse.

Meanwhile, tension builds around a legal decision set to be handed down by their uncle in his capacity as Chief Justice of England’s Supreme Court. The case revolved around a trading company that was seeking compensation from its insurance company for the loss of over a hundred Africans who had been deliberately drowned.

The question Judge Mansfield was being asked to settle was whether or not slaves should be considered human or mere cargo that could be thrown overboard for financial gain at the whim of the owner. The longer he agonizes over the ruling, the more pressure he feels to issue a far-reaching, landmark opinion likely to signal the death knell of an odious institution.

An 18th Century tale of race and romance told in a sophisticated fashion reminiscent of the best of Jane Austen.

To see a trailer for Belle, visit: http://www.youtube.com/watch?v=bTz5VjBscGk