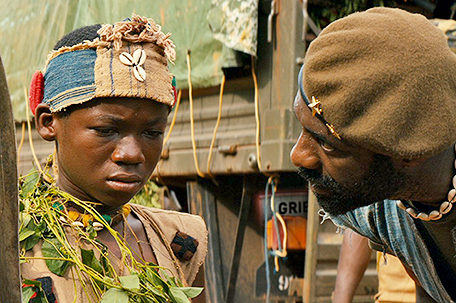 ABOVE PHOTO:  Abraham Attah and Idris Elba in a scene from Beast of No Nation.

This is gearing up to be an interesting Autumn on the big screen, and more indie films are fighting to earn their rightful place amongst the major flicks.  Filmmaker Cary Joji Fukunaga “True Detective” series wore many hats on this Netflix project acting as a producer, director, cinematographer and screenwriter, having adapted the story from novel of the same title by Uzodinma Iweala.  His labor of love is well displayed throughout this harrowing story of family and bloodshed.

This film debuted on Netflix October 16th, and tells the story of survival from the perspective of Agu (Abraham Attah) a West African boy who becomes a child soldier.  His reality shifts from partaking in boyish mischief to strife as he learns how to kill a man with a machete.  Agu quickly makes the decision to join forces with an army full of young boys led by Commandant (Idris Elba).

Because the film has been released online, movie theater chains have decided to boycott the moving flick because they believe it will reach a broader audience online through the video streaming network.  AMC, Regal, Cinemark, and Carmike are choosing not to screen the flick because it does not honor the 90 day agreement to wait to release to other outlets.

This being the case, I would still recommend watching this film.  It explains war through the eyes of a child.  A child that has seen, experienced and done more in his very young life than he ever should have.  The end of the film shows Agu attempting to adjust to the decisions he made as a child soldier and how he suffers with a longing for his lost family and suffers from post traumatic stress disorder.

There is no doubt that this film will receive an Oscar nod or two.  Please allow yourself to come out of your comfort zone for a couple of hours and experience life as a child soldier through the eyes of Agu in Beasts of No Nation.

Not rated (not recommended for individuals under 18)