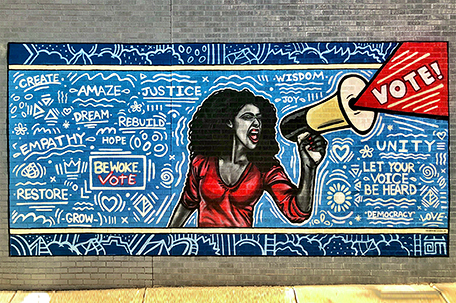 With November 3 quickly approaching, the topic at hand is the upcoming presidential election. Given the current climate of our country and the ongoing crisis surrounding the global pandemic, many would say that this election is one of the most important in history.

I can proudly say that I have voted in every election since I turned 18. There has been a heavy push — especially for young people — to vote. One organization going above and beyond to make sure that people are making their way to the polls is Be Woke Vote. Be Woke Vote has taken on a number of initiatives to encourage people to vote. They also wanted to explore the ways in which art could be used to help the cause.

After searching the area for the perfect mural location, Grammy winning producer Jahlil Beats offered the exterior wall of his studio in Chester, Pa as a canvas for McIlwaine to bring his vision to life.

“When I was trying to figure out what to do for the design, I knew I wanted focus on a woman,” McIlwaine explained. “Not only because I enjoy painting women, but also because women make up close to 51% of the population, and a large amount of the electorate.”

“Women in general —and not just in the Black  community — vote at a higher rate than men do,” he continued. “As far as having an inspiring message to get people out to vote, I thought that it would be important to have a woman be the focus of that… especially since we have a woman running for vice president.  There’s a very good chance of Kamala Harris being the first female vice president ever.”

“I wanted to have a woman empowering people to get out and vote, and surround her with a variety of positive messages,” McIlwaine said. “I used the colors that were similar to what Shepard Fairey did for Obama’s Hope poster, because I thought that would give a sense of familiarity…especially with the connection between Joe Biden and Barack Obama.”

The number of people that have voted early by mail, or by dropping off their ballots  could turn out to be the highest number of voter turnout in history. Several celebrities such as Shaq and Snoop Dogg were vocal about the fact that they would be voting for the first time in their lives.

Unfortunately, even with the enormous push to vote and an increase in numbers, there are still a lot of people who do not believe that their voices will make a difference. McIlwaine shared his views regarding the importance of voting — especially in this election.

“I think voting in general is so important,” he said. “If you look at the struggles that people went through from the 15th Amendment, granting Black men the right to vote, to the Silent Sentinels, where  women fought for their right to vote. If you look at the Civil Rights Movement, and the marches where we fought for the enforced right to vote for Black Americans being effected by voter suppression (which eventually led to the Voter Rights Act)… people fought hard for that right.”

“So, I think in general it’s important to get out and let your voice be heard,” McIlwaine continued. “But  specifically, in this current election… the person that is in office right now is dangerously negligent, incompetent, egotistical, racist and lacking in empathy. He represents everything that’s wrong with the country in my opinion. We’ve been in this state of divisiveness for the past four years, and I think it’s time to get past this and heal. We need to try to move towards something better. I think it’s important to get out there, vote and show everyone that we as a country are looking for something better.”

Election Day is Tuesday, November 3. If you have any questions or to find out more information about your polling place, visit www.VOTESPA.com or call 866-OUR-VOTE (866-687-8683). Let your voice be heard and vote!

Kyle Massey– “Get the Vote Out”