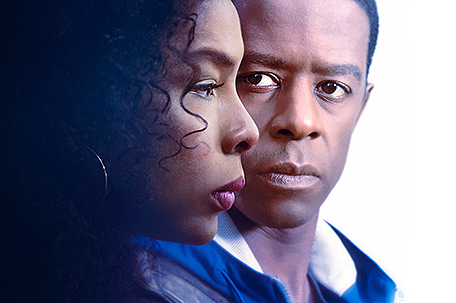 Sophie Okenedo, Adrian Lester and Dennis Haysbert are among the members of the cast of the six-part BBC1 series “Undercover”, which will premiere on the network in April.

In Peter Moffat’s orginal series, Okonedo portrays Maya, who’s about to become the first black Director of Public Prosecutions. Just as her life comes under intense public scrutiny, Maya discovers that her husband and the father of her children, Nick (Lester) has been lying to her for years. Is he concealing an affair, or is it something altogether more sinister? If she digs up his real past, will she be safe? And who wants her in this new job and why? Twenty years ago, when he was a fearless and dedicated undercover officer who infiltrated organizations considered a danger to society because of their political beliefs, Nick built himself a fake past and now with his wife unsuspecting, and his conscience killing him his secret identity may compromise the new Director of Public Prosecutions.

Haysbert plays a man who has been wrongly imprisoned and has been on death row for 20 years.

“Undercover” is the type of project Moffat has been interested in doing for a long time, he said.

“Ever since making ‘Criminal Justice’ with Hilary Salmon, we’ve been itching to get back to looking at the parts of the justice system, the media and public life that time and again, over the last five years, have been shown to be occupied by the good, the bad and the very ugly.,” Moffat said. “I’ve been lucky enough with the research sources I’ve had access to, to dig really deep into the darker corners of all these worlds, and come up with what I hope is an uncompromising and surprising thriller. I feel incredibly lucky to be writing for such a wonderful cast, with two lead actors in Sophie Okonedo and Adrian Lester who are right at the top of their games. It has been a particular privilege to have had the chance to involve and engage Sophie in the research and development process at every point.”

One can only assume that all of this new “black programming” (see announcements made earlier this week on this blog) is part of the BBC’s previously announced diversity push in light of growing and fervent criticism from BAME groups (Black, Asian and Ethnic Minorities).

Last year, making a public statement regarding an increase in diversity, BBC Films boss Christine Langan took on the challenge, saying that the lack of diversity within the UK film & TV industry is “increasingly on BBC’s agenda.”

“I can ensure you we are very mindful of it [diversity] and increasingly it is on our agenda,” she said. “We need to reflect modern Britain and I am engaged in that process. The film community needs to create opportunities to pull people through. Commissioning has taken account of it and will continue to do so.”

“Undercover” is set to premiere on BBC1 in April. BBC America will also air the series.