Barbershop 3: The Next Cut—we cut headz and crime in the community 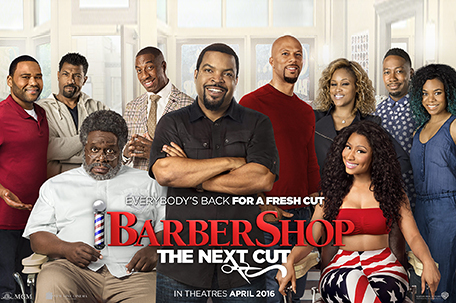 Most Philadelphians are aware that “Amerikkka’s Most Wanted,” Ice Cube was seen gallivanting around the city on March 23 promoting his most recent edition to the Barbershop franchise—The Next Cut.

He brought along co-star Deon Cole (from the ABC comedy “Black-ish”) and a check for $5,000 to support the School District of Philadelphia.  While on the red carpet at the Philadelphia premier at the Pearl North Theater, Ice Cube explained the importance of the storyline of Barbershop and how it relates to what we’re going through in the Black community today with our young men and women falling victim to gun violence and police brutality.  He wanted the film to resonate but also be entertaining, causing everyone to alert their closest followers on social media.

Barbershop: The Next Cut is a love letter to Chicago.  Directed by Malcom D. Lee and written by Kenya Barris (screenwriter for Blackish), Tracy Oliver and Mark Ross, the film opens with a typical video montage of news clips describing the state of unrest and bloodshed in the Windy City.  After this, the story takes into the place it all began—Calvin’s Barbershop to witness a comical interaction between owner Calvin Palmer, Jr. (Ice Cube) and Eddie (Cedric the Entertainer).

The shop has gotten a facelift as well. It’s is unisex with a whole side dedicated to the ladies.  As one might imagine, this causes friction in the shop and a hilarious battle of the sexes ensues with almost every conversation.  From fake women to real women, cheating and gang affiliation, a plethora of topics are covered.  Although this is the third movie for the Barbershop franchise, it doesn’t feel stale.  The writers really breathed life into this film making it fall in line with the rest of the franchise.  It may even be funnier than the first two, depending on who you ask.  There’s plenty for each moviegoer in this film and it’s all centered in black inner city life, which Philadelphians can absolutely relate to.

I was a bit skeptical entering the theater wondering if this would be worn out and tired like every other movie franchise that discovered that the third time was not the charm, but I was pleasantly surprised by the storyline and the character’s interaction.  The soundtrack wasn’t too bad either.

Calvin Palmer is still grappling with the idea of moving locations of the barbershop to raise his son Jalen (Michael Rainey, Jr.) in a better neighborhood where gang violence is a not a problem.  Stylists in the barbershop want to stop the bloodshed, so they decide to bring the community together for two days of free salon services, under the caveat that each of the gangs cease fire for the weekend.

The film tied in all the issues and triumphs that blacks understand.  The movie also took an ever-so-subtle approach to tying in the recurring theme of gentrification.  The writing was what you would hear black folk say to each other on a regular basis, even if some of the characters were over or under acting.

All can find something to laugh, dance, and relate to in this latest edition Barbershop.