‘Ballers’ looks at humor, drama in the lives of pro athletes 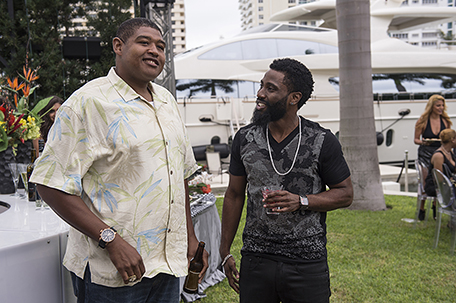 ABOVE PHOTO: Omar Benson Miller with John David Washington in a scene from “Ballers.”  (Photo: HBO)

MIAMI — Omar Benson Miller spent three seasons on “CSI: Miami,” but only this past year did he get a chance to film a television show in South Florida.

“It was Miami at the best time to be in Miami: In the winter, which is just the mildest climate,” Miller said. “They can sign me up for another 10 years of that.”

Miller appears on “Ballers,” HBO’s new series that airs at 10 p.m. EDT Sundays. It stars Dwayne “The Rock” Johnson as a retired football star trying to start a second career as a financial manager, goaded by his boss – played by Rob Corddry – to “monetize” his friendships. The show was created by Stephen Levinson, whose previous credits include HBO’s “Entourage.”

Miller plays a reluctantly retired NFL lineman who’s trying to adjust to life after the game as a car salesman.

“He’s very into his wife and into family,” Miller said. “He was really into football, but now he’s trying to transition into being a normal member of society.”

During his time on “CSI: Miami,” Miller was shooting scenes in Long Beach, California rather than South Beach. His fancy crime lab was built on a sound stage, and the building that served as its exterior was actually a federal credit union. But the cast and crew of “Ballers” didn’t use sets when they filmed around Miami last year.

“Every place that we shot was an actual location,” Miller said. “It really did a lot to keep it authentic.”

The show features an ensemble of actors playing current and former players, focusing on their personal and professional struggles. Miller said being on HBO lets them explore adult themes that enhance both the comedy and the drama.

“It’s a wild ride, but if you’re open to some fun, you’re going to have a good time with it,” Miller said.

Executive producer Evan Reilly said the idea for the show came from a conversation several years ago between Levinson and a professional football player at a South Beach hotel. While developing the show, writers pulled material from real athletes and others involved in professional sports.

“We spoke to a lot of professional athletes, both current and retired, and got a lot of their stories and a lot of their points of view,” Reilly said. “Same goes for agents and people in the front office or (with) professional teams – people who live and work in this world.”

The show’s creators decided to set the show in South Florida because of its draw for athletes from all over the country.

“It’s set in Miami because it’s really a hotbed for professional athletes in the offseason and after retirement,” Reilly said.

The setting also worked out logistically for the show’s star. Johnson owns a home in South Florida, and while he never played in the NFL like his character, he was a backup defensive tackle on the 1991 University of Miami national championship team.

“It’s great for him to be able to do movies most of the year, do all the things that he does with WWE (World Wrestling Entertainment), and then be able to go home for three months or so and work on the show,” Evans said. “It’s not something he gets to do too often, so hopefully he’ll get to do it for a few more years.”