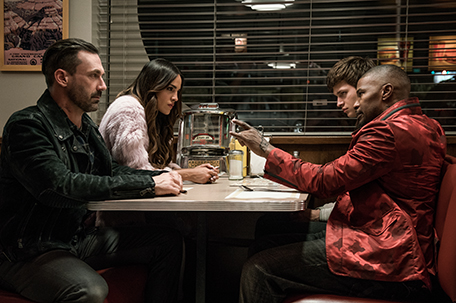 It’s that time again — summer — which means tons of action and high-octane movies will be rolling out from Hollywood and  vying for the attention of enthusiastic moviegoers, ultimately creating a profit for studios.  Released on June 28th, and making donuts in the driveway is crime thriller “Baby Driver.”

Although the title sounds absurd, “Baby Driver,” written and directed by British filmmaker Edgar Wright (“Shaun of the Dead”) tells the story of protagonist Baby (Ansel Elgort), a quiet criminal with a need for speed, and a catalog of music Questlove would even wanna browse.  He toes the line in two worlds: one where he narrowly escapes jail time and again in order to pay back his debt to crime boss Doc (Kevin Spacey) by racing around in hot cars (stolen, that is), and the other in which he is a loving son to his deaf and ailing foster father Joseph (CJ Jones) falling for waitress Debora (Lily James), who also happens to have an ear for music.  Since Baby doesn’t get his hands dirty outside of the car, helpful villians manipulative Darling (Eiza González), her fiery hubby Buddy (Jon Hamm), and off the handle Bats (Jamie Foxx) take the reins and rake in the cash with blood on their hands.

This movie is stand in your seat exciting, and the soundtrack is a necessity.  One thing it does expertly is to weave the music and the storyline together so harmoniously that when there isn’t music, it almost seems foreign.  Wright times the action to the best of the music as a trademark in his films, and this one is no exception.  In one sequence, Baby is seen bobbing and weaving through Atlanta foot traffic on his way to and from a coffee shop, and it is hard not to soak in that energy of street life and music combined.

The action scenes are quick, but timed just right as the music serves the tempo up perfectly.  The use of interesting camera angles, flashbacks, and graphics all lend a helping hand to an already entertaining film.  When there is comedy, it is usually smart-alecky or deadpan, but it’s forgivable, as the main focus isn’t the comedy but the crime at hand.  These criminals almost get away with all of their wrongdoings, but it wouldn’t be an interesting movie without some conflict.  Bats’ character proves to be unpredictable and dangerous, and his stunts get the team caught up in intense drama where Baby must decide if he wants to stay and play cops and robbers, or head west with his music and his lady by his side.  Through this conflict, we discover Baby is just as quick on his toes as he is on wheels, and he has a soft spot for death and innocent bystanders, much to the chagrin of Bats.

This film is really intense from start to finish, and introduces the audience to all genres of music that set the tone in each scene.  One can tell this was a thoughtful and intentional film process to get all of these elements correct.  Some sequences are even reminiscent of F. Gary Gray’s criminal masterpiece “Set It Off” or “The Italian Job.”  Normally, Wright’s focus is on parody films, but “Baby Driver” is a film that celebrates its seriousness.  While there is some predictability mixed into the 113 minute film, it is minimal compared to everything else that is happening.  This film is sweet, steady and thrilling, all wrapped up with an extraordinary soundtrack, and guaranteed to keep audiences more than happy in the theater this summer, definitely a flick to see more than once.