Producer Keith Beauchamp is no stranger to Emmett Till. It was his Emmy-nominated film, The Untold Story of Emmett Louis Till, that prompted the U.S. Justice Department, to reopen the case in 2004. Since his production of Untold, Beauchamp has worked closely with FBI and their Civil Rights Cold Case Initiative, producing documentaries on other unsolved civil rights murders in his capacity as Executive Producer and Host of Investigation Discovery’s (ID) crime reality series, “The Injustice Files.”

Originally a Criminal Justice major at Southern University in Baton Rouge, Beauchamp left school to pursue justice for Emmett Till. He remains the only filmmaker to work closely with the Till family and is dedicated to sharing their heartbreak and their mission to advocate for change.

Now, he has launched a Kickstarter in support of Till, a feature-length drama he’s making about the life of Emmett Till. “After dedicating two decades of my life seeking justice for Emmett Louis Till,” Beauchamp explains, “I’m truly excited and moved to finally bring his true story to the world.”

“Here is a story that is as much a part of American history as the Boston Tea Party and may stand as the greatest argument for getting rid of sanctioned racism,” adds producer Whoopi Goldberg. “Emmett Till’s brutal death at the hands of ignorant, brutish people exposes the Jim Crow-era South that gave the implicit okay to uphold that kind of racism without any real fear of repercussions. Today, the return of rampant, unchallenged racism cries out for the telling of Emmett Till’s story again.”

Kam Williams: Hi Keith, thanks for another interview.

Keith Beauchamp: Always great speaking with you Kam. Thanks again for the support and for the coverage.

KW: What interested you in making a drama about Emmett Till, since you already did a documentary about him?

KB: My life/career has come full circle. I’ve always wanted to produce a feature on the Till case. In fact, that’s how my journey as a filmmaker started. The documentary, “The Untold Story of Emmett Louis Till” was my second vehicle to get the true story of Emmett Till out to the public. After gathering research, in 1998 I wrote a screenplay that was later optioned off by producers who had a deal with Showtime. Not knowing much about the industry, I felt that I gave my baby away because of the option period and the lack of interest in a Till film. The option eventually expired, but during that process I continued to travel to Mississippi and around the country gathering information on the case. After I discovered vital information that I felt could be critical in the reopening of the case, I decided and was encouraged by Mother Mobley to pursue the documentary so we could use it as a stepping-stone to get the case reopened.

After Mother Mobley’s passing and before the documentary was finally released in theaters in 2005, the 50th anniversary of Emmett’s murder, I was already, behind the scenes, sharing the evidence I’d gathered with federal authorities and local officials. It would be those meetings that led to the reopening of the case on May 10, 2004. Considering that I was involved with the Till investigation, I had to be very careful about what was presented in the documentary. The Till feature will be my second chance to get the full and true story of Emmett Louis Till out to the masses. Lastly, it also helps to have a Dream Team that includes, Fred Zollo, Whoopi Goldberg, Tom Levin, Susan Rose, Paul Kurta and my co- writing partner Michael Reilly. 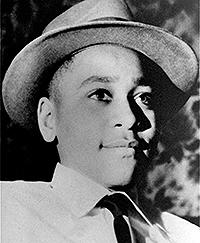 An undated portrait of Emmett Louis Till, a black 14 year old Chicago boy, whose weighted down body was found in the Tallahatchie River near the Delta community of Money, Mississippi, August 31, 1955. Local residents Roy Bryant, 24, and J.W. Milam, 35, were accused of kidnapping, torturing and murdering Till for allegedly whistling at Bryant’s wife. (AP Photo)

KW: Who do you want to star in the film?

KB: [Smiling] Great question, Kam. I’ve devoted 22 years of my life telling the story of Emmett Louis Till and pursuing justice in his case. I’ve worked closely with Mother Mobley for 8 1/2 years before she passed away. It’s very important that my team and I choose someone that will portray my late friend and nurturer in the right way. Although we have not locked the title role as of yet, I’ve been thinking a lot about Taraji Henson. I’ve watched her career flourish over the years and when I saw her performance in The Curious Case of Benjamin Button, it sealed the deal for me. But there’s also Kerry Washington and others that I believe could play the role well.

KW: What’s going to be the focus of the film?

KB: Till is adapted from my documentary, The Untold Story of Emmett Louis Till and from research used to get the case reopened, as well as from Simeon Wright’s book, “Simeon’s Story: An Eyewitness Account of the Kidnapping of Emmett Till.” Mr. Wright was my missing link in getting the case reopened. He was also the cousin who shared the bed with Emmett Till the night he was abducted. Our focus will be Emmett Till’s murder and the catalytic decisions made by his courageous mother, which led to the mobilization of the American Civil Rights Movement.

KW: What message do you want people to take away from Till?

KB: I want people to be inspired and understand that the fight for freedom and justice is a continuous one, despite the post- racial society concept, that some of us want to believe. I firmly believe that this film will be a catalyst for change, just like the murder was in 1955.

KW: Do you think the movie is more relevant, given the rise of the Black Lives Matter movement?

KB: Yes, the timing could not be any better than now. As we continue to witness the ongoing police shootings of unarmed black males with no accountability and those suffering an injustice within our broken criminal justice system, Emmett Till’s name is often evoked.

KW: How do you explain the country’s sudden attention to the killings of blacks by police and white men? Is it just that so many incidents are being captured on cell phones?

KB: Unfortunately, what we are seeing today is not a new phenomenon. Police brutality and hate crimes committed against African Americans and other people of color can be traced all the way back to the South Carolina Slave Patrol and the moment we planted our feet on American soil. Yes, I believe that because of technology we are now subjected to being exposed to this epidemic daily. Although it’s great to be aware of what’s going on in our country, receiving daily doses of this type of cruel behavior is very harmful to our spirit and human beingness.

KW: Why did you turn to a Kickstarter campaign to underwrite the project?

KB: We chose Kickstarter because I wanted to make a film for the people and by the people. Over the years, Fred Zollo and I pitched the film to studios and no one would bite. Perhaps the timing was wrong or they were just not interested. We decided long ago that we will make this film with or without a studio being attached, which led us to the Kickstarter platform. Understand that we are not trying to break any Kickstarter records with a goal of just $50,000. Our main mission for using this vehicle is to allow the public participation in the making of this film, and to garner grassroots support, just like I had in the making of the documentary. This is not just a movie to me, it’s a movement. It’s a way to awaken the “Sleeping Giant for Change” once again.

KW: Are you still reopening cases of unsolved lynchings around the South?

KB: Yes. I still have “The Injustice Files” franchise at Investigation Discovery and continue to assist the FBI with their Civil Rights Cold Case Initiative. However, for a year now, I’ve been on hiatus, gathering myself so I can fully focus on our Till feature. I will continue to investigate and produce documentaries on civil rights murders. This is my golden opportunity that I’ve been waiting for to crossover into the feature film genre, but I will always be here for families who are in need.

KW: How many Black people do you think were lynched between Emancipation and 1980?

KB: There are at least 4,000 documented lynchings between Emancipation and 1980. However, there are some experts that believe there were two to three times more undocumented lynchings… Disturbing data that is unimaginable to think about.

KB: Lately, I have been re-reading James Baldwin’s books. “The Fire Next Time” and his old lectures inspire me, because they speak to the way I feel at this moment and time.

Baldwin said “To be a Negro in this country and to be relatively conscious is to be in rage almost all the time.” It is also great to read the work of someone whose second play, “Blues for Mister Charlie,” was loosely based on Emmett Till’s murder.

KB: I’ve always been a God-fearing man and often felt that what’s for me, will be. I heard it from my mother all my life and, with the experiences I’ve had along this journey, I can’t help but think there’s something higher watching over me.

KB: I would have to say my parents, Mr. and Mrs. Edgar Beauchamp. They have allowed me to charter uncertain waters without discouragement. You can’t imagine their faces when I decided to leave college in my junior year to work in film with my childhood friends. I consider myself an unintentional filmmaker, because I was hoping to become a civil rights attorney. Early on in my life, my parents instilled in me the value of speaking for those who can no longer speak for themselves. If it wasn’t for my parents believing in me and financing Untold, it would not have been made and there would be no Keith Beauchamp filmmaker today.

KB: I carry a money clip. Not much there but credit cards. Many of us who work in the field of civil rights know that it does not come with a paycheck. So, it’s a constant struggle to survive while doing this work. But I’ve been very blessed to do this work and maintain a humble lifestyle.

KW: Thanks again for the time, Keith, and best of luck with the project.

KB: Thank you, Kam. I’m very happy and excited to bring this to the world. Another promise fulfilled and dream coming true.

To contribute to the Kickstarter campaign for Till, visit: https://www.kickstarter.com/projects/653510710/till