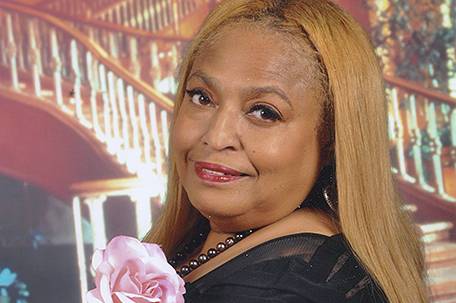 Anthony is also the publisher and editor-in-chief of Black Noir Magazine, as well as a busy blogger. She has appeared on many TV shows, including “Life After,” “omg! Insider,” “Entertainment Tonight,” “Inside Edition,” and other programs on the Fox News Channel, CNN, HLN and MSNBC.

A graduate of Howard University, Anthony resides in the East Harlem section of New York City. Here, she talks about her new novel, Deadly Stuff Players.

Kam Williams: Hi Flo, it was great finally getting to meet you at the Pocono Mountains Film Festival.

Flo Anthony: Hello, Kam. I feel the same way. You are such an amazing journalist. It was a thrill to finally meet you, too.

KW: Thanks! You are a Renaissance woman who wears a lot of hats: radio host, publisher, editor, gossip columnist, publicist, blogger, talk show guest, syndicated columnist and novelist. How do juggle so many interests?

FA: Thanks for the compliment. I keep a very tight daily schedule. I provide live radio feeds to almost 30 stations from 7:35 am until 5:00 pm. From 9:30 to noon, I research and write two shows, Gossip On The Go With Flo and Flo Anthony’s Big Apple Buzz for the next day. At 12:10 pm, I record the shows. Then I start up live again at 2:00. In between feeds, I write my other columns and work on other projects. I was on a three-month deadline to write Deadly Stuff Players, so I began work on it at 5:00 every morning, did my other work between the radio feeds, then resumed work on the novel at 3:30, then worked until around 7:00 every evening and all day on Saturdays and Sundays.

KW: Which one do you enjoy doing the most?

FA: I love it all, but my radio show is my baby. I can say whatever I want and I love interacting with the air personalities. It is not financially as rewarding as it should be, but the creative outlet rewards my soul.

KW: What celebrity was your favorite interview of all time?

FA: Michael Jackson, every time I interviewed him throughout the years. The most exciting interview with him was when I took the “Inside Edition” cameras onto the set of his “They Don’t Care About Us” video. I was very humble about it at the time, but looking back on it, it was a huge deal!

KW: Who did you most like representing as a publicist?

KW: What TV show have you had the most fun appearing on as a guest?

KW: What inspired you to write Deadly Stuff Players, a sequel to Keeping Secrets, Telling Lies, your first novel?

FA: I loved the characters Valerie and Rome, and wanted to bring them back. And, I kept coming up with all the other great characters like Vance Dumas, Platinum Pizzazz, Royale Jones, Turquoise Hobson, etcetera.

KW: The heroine of the book, Valerie, is a gossip columnist. Is the character based on you?

FA: Yes, she is me down to the long blonde hair and love of Christmas. A lot of things that happen to Valerie in the book have actually been my experiences.

KW: Tell me a little about “Deadly Stuff Players.” The cover says “Zane Presents,” which makes me naturally expect a steamy romance novel. Yet, the title suggests that it might be a murder mystery. Which is it?

FA: It is a murder mystery, although it does have a half-dozen love scenes. Zane has her own imprint, Strebor Books.

KW: Tell me a little about the plot in 25 words or less?

FA: It revolves around Valerie and Rome, who is an NFL Hall of Famer-turned-Private Investigator, as they try to solve the murder of drug-addled socialite Andrea Dumas. She is the wife of African-American dot.com billionaire Victor Dumas and mother of Vance Dumas, a jockey. The story follows Rome and Val around L.A. for five days and all the wild people, murder and mayhem they encounter.

KW: What was the most challenging aspect of writing the novel?

FA: Getting it exactly the way Zane wanted it to be.

KW: Who is the right audience for the book?

KW: What message do you think people will take away from it?

FA: That good prevails over evil and that life can have a happy ending.

FA: Can I offer you a million dollar deal? Yes, you can. Thank you very much. [LOL]

KW: [LOL] Would you mind saying something controversial that would get this interview tweeted?

FA: I think that both Michael Jackson and Whitney Houston were murdered. They were both seasoned drug users. They wouldn’t have overdosed. [Laughs again]

FA: Just now when I answered the last two questions. I believe laughter is good for the soul and I laugh all the time.

FA: Drinking chardonnay. The new one is Flo wine by Marcus Johnson.

FA: I read several novels a week, but the last good one was “A Family Affair” by Roshonda Tate Billingsley. I’ve actually read it over and over.

KW: The Mike Pittman question: What was your best career decision?

FA: To move to New York City by myself the Monday after I graduated from college to pursue my dreams.

FA: I don’t mean to sound vain, but a beautiful, seasoned woman.

FA: First, I would go to church and pray. Then, I would have a wonderful dinner and wine with my boyfriend Claude, and call my cousins and friends to say good-bye.

FA: Going to the store for bananas in Mississippi when I was about 2.

FA: To fly! That way, I could move around fast!

FA: Most get very little sleep and are early risers.

FA: Never give up! If you really want to do something, you can do it. Can you imagine that a person like me, born in Mississippi, raised in Ann Arbor, Michigan, child of schoolteachers, would one day interview Michael Jackson and be able to call him and La Toya my friends? I could always write from a little kid, so I knew books were in my future.

FA: As a nice person who gave of herself and was kind.

KW: Did it feel funny being asked these questions, instead of being the one doing the interviewing?

FA: No, I love being interviewed.

KW: Thanks again for the time, Flo, and best of luck with the book and all of your other endeavors.

FA: Thank you Kam, for all of your help and your contributions to the literary world.

Go With The Flo