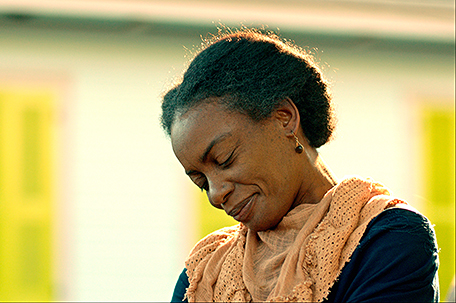 ABOVE PHOTO: Aunjanue Ellis as Queenie in a scene from Of Mind and Music.

Aunjanue Ellis currently stars as Miranda Shaw, the director of an FBI base who oversees the training of a new group of recruits, on the ABC-TV drama “Quantico.” And she recently appeared on BET’s epic series “The Book of Negroes” for which she received a Television Critics’ Choice Award nomination for Best Actress in a Movie or Limited Series.

Ellis has also starred in numerous movies, including The Help, where she played Yule Mae Davis, the maid arrested for allegedly stealing a ring. In the James Brown biopic Get On Up, she portrayed Vicki Anderson, acknowledged by Brown in his autobiography as probably the best singer he ever witnessed. 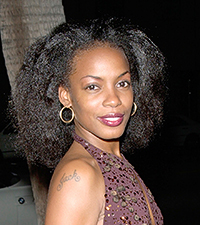 Ellis’ additional film credits include Romeo and Juliet in Harlem, Ed’s Next Move, The Express, Freedomland, Lovely & Amazing, A Map of the World, Notorious and The Volunteer. She made her motion picture debut in Jim McKay’s Sundance Film Festival hit Girls Town, opposite Lili Taylor.

On television, she starred in “Abducted: The Carlina White Story” and garnered a second NAACP Image Award nomination for her portrayal of Candy Carson in the made for television film “Gifted Hands: The Ben Carson Story.” Ellis has appeared as a series regular on “The Mentalist,” “High Incident,” “E-Ring” and “Justice.”

Though born in San Francisco, she claims the small Mississippi town of McComb as her home. There, Ellis’ grandmother raised her on a farm that has been in the family for generations. “My mother gifted me with my particular kind of radical imagination,” she reflects, “and my grandmother gave me the tools to execute it.”

But it was not until she was a student at Tougaloo College that Ellis would discover the stage. That led her to transfer to Brown University, where she received her Bachelor of Arts degree in African-American Studies, while also training as an actor. She went onto receive a Master of Fine Arts degree from New York University’s Tisch School of the Arts.

Here, she talks about her latest outing as a New Orleans street singer suffering from Alzheimer’s in Of Mind and Music.

Kam Williams: Hi Aunjanue, thanks for another opportunity to speak with you.

KW: What interested you in Of Mind and Music? Do you know anyone suffering from Alzheimer’s?

AE: It was a New Orleans story, first and foremost, and my romance with that place is deep and enduring. And yes, my Aunt Mae had Alzheimer’s. My mother has Parkinson’s disease. So, neurodegenerative diseases have defined our family life. It was free therapy for me to be able to explore the living pain of it as an actor.

KW: How did you prepare to play Queenie?

AE: One of the symptoms of Parkinson’s is intermittent dementia. So my mother’s experience informed a great deal of my choices. I studied her and took what  I learned to work.

KW: What was the most challenging aspect of the role?

AE: I had never played anyone like her before. What was most challenging was playing the age which meant a long time in makeup, and being consistent with her manner. I hope that people will watch the movie and start a needed conversation about the woes and rewards of caregiving for someone who has the disease. And also I hope it spurs an urgency to cure it.

KW: Congratulations on the success of The Birth of a Nation, where you play Nat Turner’s mom, Nancy. Were you surprised when the movie won both the audience’s and the jury’s Best Picture awards at the Sundance Film Festival last month?

AE: Thank you. I loved working with Nate on the film. He is such a generous director, producer and acting partner. I am so proud to be a part of it. The night of the screening was magic. And while I had no expectations, I had an inkling that something remarkable would happen.

AE: I am reading several books at the same time now, but you can find most of my DNA on “A Brief History of Seven Killings” by Marlon James.

AE: “Turn Your Love” by Half Moon Run. Then, I listened to myself eviscerate Al Green’s version of “One Day at a Time.”Thank God for walls!

AE: My Cherry Cobbler. I can eat the whole thing by myself.

AE: My heartbreak when my crush, Tommy Vick, shared his headband with another girl. I was 3.

AE: My grandmother loved me crazily

AE: Spiritual component: Well, I was raised by the wife of a pastor of four churches. So, I was in church in some capacity almost every day from the time I was 3 until I went to college. There was no choice. But I have no resentments. None. In fact, I am so grateful for it. The experience of that rooted me in the notion of worship. And that is what art is–worship. Giving of yourself completely to the creation and acknowledgement of something bigger than you, higher than you. Whatever that may be.

AE: My first job was working in concessions at the local movie theater. Best job ever. Free movies. Free popcorn. Still one of the joys of my life. Free movie and lots of free popcorn.

AE: More and more, I see my Aunt Mae. That makes me happy. I liked that woman. A lot!

AE: One of the craziest was a knock-down, drag-out fight I had on the Great Wall of China with my boyfriend at the time. The tourists were so confused.

AE: Oh gosh, me and wishes. The first is I would cure my mom’s Parkinson’s.

AE: What excites me is when I doubt myself and then prove me wrong.

AE: I have no guilty pleasures. I proudly own ALL of my bad taste!

AE: May I give you a million or more dollars to film the project you have written? [Laughs]

AE: I have several, but I’m loving Delpozo right now. My dream is to rock a dress at Jazz Fest in New Orleans.

AE: When the first real boyfriend I had broke up with me, I spent years grieving and trying to get him back. Such a waste of time! I am still paying to this day for professional choices I made because of that folly. Heartbreak now fuels me. I use it. I will never again be bowed by it. I won’t deny hurt. I won’t deny pain. But I will get up out of the deathbed and go to the audition anyway.

AE:  I love that question, because I love monsters! I always crush hard on them. When the recent Godzilla came out–I clapped like a baby when he came on screen and then I don’t remember what happened after that. Oh, and the Predator! Oh my! Those locks in his hair… His infrared vision… Lemme stop. It’s too much.

AE: They never stop being children. They have a constant sense of discovery, they don’t understand the word “no,” and they know how to create new worlds and systems with little or nothing.

AE: I’m not good with advice. I would say, if you are someone who shared my particular background–being a country girl with no one around me pursuing what I wanted–I highly encourage naïveté. And singular focus.

AE: For working to the bone to rid my home state of Mississippi of its racist fetishes. And for my cobbler, of course. [Laughs]

KW: Thanks again for the time, Aunjanue, and best of luck with the film.

To see a trailer for Of Mind and Music, visit: https://www.youtube.com/watch?v=7F-eQkLQM6k