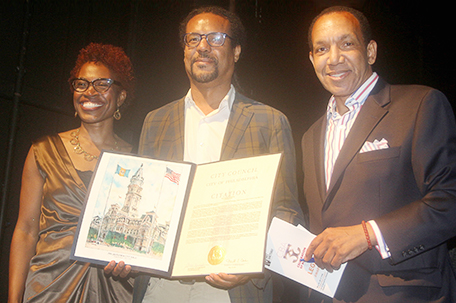 A welcoming crowd gathered for the Art Sanctuary’s Legacy Awards at The Arts Bank at UArts last Friday.

As host of the Legacy Awards, music and radio pioneer Dyana Williams led the audience through a tour of artistic excellence.

The first award recipient of the evening was Washington, who received the Legacy Award for Excellence in Journalism. Created in honor of the late veteran journalist Chuck Stone, the award honors a journalist’s longevity and impact.

With a career that spans over three decades, Washington had lots to say, particularly about appreciation.

“It’s all about trying to make a difference while being the same person off-air that you see on-air,” Washington said. “Journalism has come such a very long way over the years, but no matter how you slice it, or how you write it, or how you present it, it’s still about the who, what, why, where, when, how, and based on truth. I will always be a proponent of the human experience. I take great pride and joy in this profession. I’m truly honored to do what I do and to have a great team beside me.” 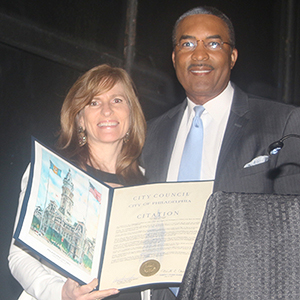 Collier received the Legacy Award for Excellence in Visual Literacy and stressed the importance of our children seeing reflections of themselves on the covers of books and represented in the stories within them.

Whitehead, whose book “The Underground Railroad” received the Pulitzer this year, received the Legacy Award for Excellence in Literature. As part of his acceptance speech, he talked about that experience.

“It’s been a crazy year, I’ve never had a response like this,” Whitehead said. “’The Underground Railroad’ is my eighth[book]. I first got the idea 17 years ago. I remember I was in the fourth grade, and my teacher was explaining how it worked. I had a vision of a subway beneath the earth. I was from New York, and that’s what I thought. Then she explained that’s not how it worked and I was very upset. So, I had a cool idea for a book, to make the Underground Railroad real. I added an element of each state, each being based on an American possibility like Gulliver’s Travels. And though it was a good idea, if I would’ve tried it then I would’ve screwed it up. I didn’t think I was wise or mature enough.”

“Thankfully,” he continued “timing has a way of working things out exactly as they should be.”

Dumpson, President and CEO of Diverse Arts Solutions, received the Gamble & Huff Award for Excellence in Songwriting and Producing. He has shared the stage with Quincy Jones, Oprah Winfrey, Stevie Wonder, Babyface, and Whoopi Goldberg – people known worldwide for their dedication to keeping the arts alive. After thanking the Art Sanctuary, the founder, and Executive Director Valerie Gay, Dumpson charged the audience to keep the arts alive by doing the following – supporting the arts, and supporting Art Sanctuary.

The Urban Guerilla Orchestra (aka UGO), provided music throughout the night for various performers including composer and musician Hannibal Lokumbe, and spoken word artist Ursula Rucker.

You can support Art Sanctuary and their future endeavors by visiting their website at www.artsanctuary.org. Also, be sure to join the conversation about Black men doing positive things in our community by using the hashtag #BlackMenIKnowPHL.