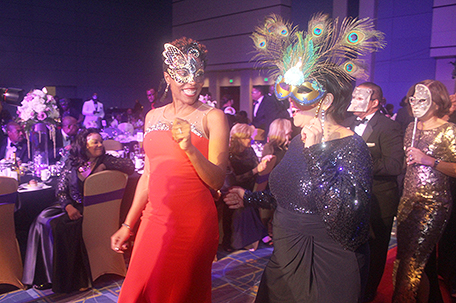 ABOVE PHOTO: Lovely ladies in the Parade of Masks during the UNCF Mayor’s Masked Ball.  (Photo: Robert Mendelsohn)

I had the pleasure of attending the 2017 Philadelphia United Negro College Fund (UNCF) Mayor’s Masked Ball on March 18. The annual fundraiser was supported by over 600 guests and volunteers at The Pennsylvania Convention Center.

“We look to you to invest in our members’ Historically Black colleges and Universities and their record of outperforming larger and better-funded institutions at enrolling and graduating low-income students. Students look to UNCF for the education they need to go to college and on to careers of success and service and UNCF looks to you,” said UNCF President and CEO Dr. Michael L. Lomax.

I spoke with Mayor James F. Kenney about the potential impact of President Trump’s proposed budget on Historically Black Colleges and Universities (HBCUs).

“The President’s  proposed budget if passed in its current form and, which will hopefully not happen, will impact the social fabric of this country,” remarked Mayor Kenney. “It will have an impact on education, senior citizens, children, veterans, people with disabilities and everybody he always said he was going to protect. This budget is an all-out assault on social programs and things that have been around in or country for generations.

He’s going to dismantle them and pump up the military and build a wall. I become more and more worried about the future of our country every day. The man [Trump] clearly has no experience, and that’s not a good thing. People who sometimes tout themselves as candidates and not as politicians, who have the experience, are not an attribute for the job today.”

“The UNCF Mayor’s Masked Ball gives the United Negro College Fund (UNCF) the opportunity to tell our story,” said UNCF Area Development Director Gregory L. Lyles, who attended the event with his lovely wife, Dr. Claudia Lyles. “It is a provocative story that began with the founding of Black institutions of higher learning in the 1800’s, and still exist today. The UNCF supports thirty-seven Historically Black Colleges and Universities today. Two institutions that are critical are religious and educational colleges and universities, and we continue to support them to change the trajectory of our lives.”

Each year, the prestigious “Masked Award,” created by renowned national artist Brenda Singletary, is presented to outstanding honorees, “who have served as beacons of hope, who support the UNCF’s mission of providing educational opportunities, and who keep the doorway of opportunity wide open for African-American youth.”

“I have had the pleasure of working with the United Negro College Fund (UNCF) for the past five years. I have two sisters, a mother, and husband who are all proud graduates of HBCU’s. The work that UNCF does is amazing.  I’m proud to be honored. It’s a great night,” said Coker-Graham.

Hilferty remarked, “I am proud to represent IBC in the community, and we structure our organization to be as diverse as possible at all levels of the company.  We are about supporting highly qualified, innovative entities. Therefore, we will always be there for the UNCF.”

This year’s Masked Ball fundraising gala announcers were Sheinelle Jones, news anchor for NBC Universal and Rick Williams, news anchor for WPVI 6ABC. Welcoming remarks were made by Fred Mitchell, Senior Vice President of Development for the Northeast and Midwest Division of UNCF, and by Stephanie Mays Boyd, Vice President of Sales and Marketing for the Pennsylvania Convention Center and Leadership Council Chair of the UNCF Philadelphia area office.

Other highlights of the evening included fine dining after the invocation, which was offered by Pastor William B. Moore of the 10th Street Memorial Baptist Church.  Auctioneer David Goldman presided over an exciting live auction that raised more than $160,000 to support deserving students. The coveted Mayor’s Mask, designed by senior Danielle Rice, and junior Zimir Wilkins of Merrill Dobbins C.T.E. High School’s fashion program, went for $2,700. The pair was chosen to design the mask from a 57-student competition.

Guests danced to great live music from DJ Gary O and Lyle Band. The gala’s traditional “Parade of Masks” was, as always, entertaining and fun.

The 2017 Philadelphia UNCF Mayor’s Masked Ball was a tremendous success, and I send congratulations to all involved.

Tweet Share Pin Email While there wasn’t the usual level of pomp and circumstance, the swearing-in of...