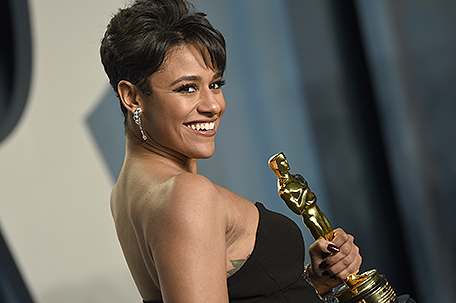 ABOVE PHOTO: Ariana DeBose arrives at the Vanity Fair Oscar Party on Sunday, March 27, 2022, at the Wallis Annenberg Center for the Performing Arts in Beverly Hills, Calif. (Photo by Evan Agostini/Invision/AP)

LOS ANGELES — Ariana DeBose lived up to Oscar predictions and followed the path of her “West Side Story” predecessor Rita Moreno.

DeBose won the best supporting actress trophy Sunday for her breakout performance as the fierce Anita, 60 years after Moreno claimed the award in 1962 for the original film version of the Broadway musical.

“Yikes, OK!” DeBose said, holding the statuette up in triumph. “Now you see why Anita says, ‘I want to be in America.’ Because even in this weary world that we live in, dreams do come true. And that’s really a heartening thing right now.”

DeBose gave a shoutout to Moreno, who attended the ceremony.

“I am so grateful your Anita paved the way for tons of Anitas like me,” she said. Moreno was an Oscar pioneer, the first Latina to win an acting award.

DeBose is a groundbreaker in her own right, the first Afro-Latina and openly LGBTQ actor to win in the category. In her acceptance speech, DeBose said she found her “strength in life through art.”

“To anybody who has ever questioned your identity,” she said, “I promise you there is a place for us.”

Largely unknown in film circles before landing the coveted role, the 31-year-old North Carolina native became the clear Oscar favorite after an awards season full of victories. She was previously primarily known as a stage actress, with Broadway roles in “Bring It On: The Musical,” “Motown: The Musical” and “Hamilton.”

“This is magic,” she said, waving her Oscar backstage, “but it’s magic that did not come without effort.”

She offered more praise for Moreno, saying she “opened many doors, not just for me but for many Latinas. When you’re the first of anything, it’s lonely. She’s not alone anymore.”

DeBose’s Oscar makes the third time that two actors have earned trophies for playing the same role, following Heath Ledger and Joaquin Phoenix as the Joker, and Marlon Brando and Robert DeNiro as Vito Corleone.

Earlier this month, DeBose said she considered it important and “thrilling” to see Latino screen achievement celebrated after it was largely snubbed in 2021.

Progress means “getting people in front of the camera and behind the camera and into the writers’ rooms and in positions of power, so we can continue to tell our stories in an authentic” and expansive way, she told The Associated Press.

Moreno gave her helpful and concise advice before the ceremony.