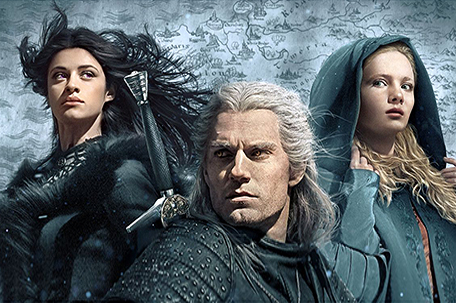 Fantasy has become the new reality, and viewers can’t seem to get enough of it. Fans of the fantasy genre will be blown away by Netflix’s newest fantasy series, “The Witcher.” Based on the book series of the same name, the highly anticipated series tells the story of Geralt (Henry Cavill), a monster hunter, Princess Ciri (Freya Allan) a young princess with a secret, and Yennefer of Vengerberg (Anya Chalotra), a powerful sorceress. Audiences are taken on a journey through the three intertwined tales of good, evil and the in between.  Allan and Chalotra stopped in Philadelphia on their press tour and sat down with The SUN to discuss all things The Witcher.

Netflix’s “The Witcher” is based on a popular book series and video game. Allan and Chalotra spoke about working on a show with such a huge following.

“I suppose you do approach it differently, because you actually have some material to look at with the books,”Allan said. “It’s weird to know that people have their own interpretation and their own version of the character that they have fallen in love with, but I think I did very quickly put that aside and thought I would do my own version of Ciri.”

“You also remind yourself that we got cast, so they trusted us,” Chalotra added. “When you think about that it’s like ‘hang on a minute, there’s a reason I’m playing this character.’”

The women of “The Witcher” are powerful, complex multifaceted characters with layers upon layers of depth. Allan and Chalotra discussed what it was like to delve into the complexities of their characters respectively.

“I think all the women characters are multidimensional,” Chalotra explained. “The writers did a really good job at bringing these human beings to life and with such strong attributes. Personally, by giving Yennefer backstory and focusing on Ciri and Yennefer’s journey independent from Geralt’s, it means that you can really see where our desires, needs and wants come from.”

Both Yennefer and Princess Ciri have tragic backstories. The pain of their past plays a huge part in the women that they become. Chalotra and Allan discussed the challenges of their roles.

“Yennefer was a huge challenge and one that I loved and was really excited about as an actor,” Chalotra said. “I had the support of prosthetics and a mouth guard. When she is transformed, I have the help of makeup and a corset. I really fell in love with her. Playing someone from the age of 14 to someone in her late 70’s and going on that journey having to empathize with her fears and insecurities… I felt really connected to her. All the women characters are so well rounded.”

“Ciri starts off only ever being around people who are looking out for her that she trusts,” Allan said. “When she goes out into this world, she discovers things about her family that she didn’t know. She also discovers that she has powers that they kept that from her. She realizes, that trust is a huge thing that she must question… even with her family.”

“She suddenly realizes that there’s so much she doesn’t know,” Allan continued. “With regard to the people that she meets along her journey, it’s hard for her to know who wants to use her — but what I love about Ciri is how open she is about seeing the good in people.”

Fans of the book and the video game will be delighted to know that the show is action packed and will leave audiences on the edge of their seats.

“I’m so excited, because I’m getting ready for horse and sword training” Allan said. “I’m going to get my teeth into it and it’s going to be my life.”

“Ciri is going to kick butt…  but not Yennefer’s,” Cholatra added with a laugh.

Be sure to follow and keep up with Anya Chalotra and Freya Allan on Instagram at: @anyachalotra and @freyaallan.

“The Witcher” will be available to stream on Netflix on December 20, 2019. It’s binge worthy, to say the least, and audiences will not be disappointed!