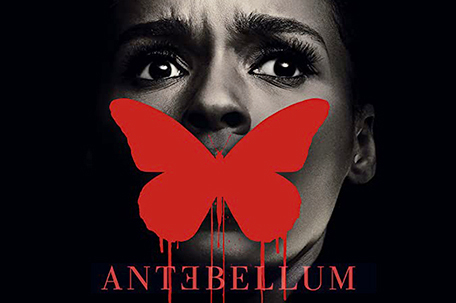 Imagine being forced into a life of servitude, never ceasing torture and abuse, after knowing what it means to have freedom.

Lionsgate’s “Antebellum” explores this notion, framed around the horrors of slavery. The film highlights the stories of stolen Black  people, stripped of their humanity, dignity and identity and forced to acquiesce to every whim and desire of an abhorrent group of white people on a plantation during the Civil War era.

“Antebellum” — which is the feature film directorial debut of Gerard Bush and Christopher Renz — centers around the life of Eden, played by Janelle Monáe — a slave with a reputation for trying to escape.

Set in Louisiana, the film places the terrifying reality of slavery front and center in a way that is impossible to ignore. The torture sequences are hard to stomach. A runaway slave is killed in front of her significant other, a pregnant slave is abused by a soldier, which causes her to have a miscarriage… that slave later hangs herself.

Eden is viciously beaten and branded with a hot iron for not accepting the name that her ‘owner’ deemed appropriate. During that scene, Eden is scolded and told that she is a savage. She is later raped by the general and told, “I’m responsible for you now and will tame your savage ways.” She is also reminded “they will never take you away from me.”

Branding, an inhumane practice usually reserved for animals, was used as a means of torture, punishment and control for “unruly” slaves. Raping and tormenting Black women, while convincing themselves that whiteness has gifted them with a right to do so, was also a standard practice. Their perception is that being born white makes them superior to blacks as they are “descendants of the gods.”

Additionally, the slaves are repeatedly silenced. They are told they only have permission to speak when a white person grants them the right to do so. They are stripped of both their physical and intellectual freedom.

The film also showcases the power dynamic between white men and Black  men.  Whenever the Black  men on the plantation try to protect the Black  women, they are brutalized. Slaves that resists are beaten, shot or burned alive in what’s referred to as “the shed.” The themes of blind submission and white supremacy as a birthright are woven throughout the film.

In the second act after waking up from a dream, it is revealed that Eden is actually a successful author and public speaker named Veronica Henley. The film transports the audience between present day and what appears to be a past life and connection to the sordid history of slavery in America. We see examples of the vitriol some white women use against Black women. Julia demeans Veronica’s life’s work on a video call, and later sends a bouquet of flowers with pieces of cotton in the arrangement to her room with a note that says “Looking forward to your homecoming! -X.” After travelling for work for a public appearance, Veronica is kidnapped in the present day and forced into modern slavery. A group of sick and twisted white supremacists live out their fantasies of owning and tormenting Black people on a plantation hidden in plain sight, veiled as a Civil War reenactment location.

“Antebellum” is successful at drawing very clear parallels between past and present-day micro and macro aggressions as it pertains to the way that racists view Black people. Although Veronica is a well-known author, she is still a Black woman. The fact that she is an accomplished author who discusses the importance of representation, women’s empowerment and the intersectionality between race, gender, and racism is considered an abomination.

The film also draws attention to the connection between racism and the dynamics of power. Intelligent Black women and men are viewed as nuisances that need to be conquered, silenced and tamed. Veronica is ignored by a concierge who takes a phone call in the middle of their conversation, after making a reservation at a fancy restaurant, the hostess attempts to seat her party at a table in the corner with dishes piled up right behind it, and Julia is granted to access to Veronica’s room in the Jefferson Suite with no key or identification.

These are just some examples of white privilege. The film showcases just a small fraction of the violations that Black people are forced to endure on a daily basis. Many of the characters and interactions the audience sees on the plantation are also seen in Veronica’s life. Julia’s child, who we see participating in renaming the slaves, warns Veronica during an elevator interaction, “Shhh, you’ll get in trouble for talking.” This reinforces the idea that Black people should not have a voice.

The slaves — regardless of age — are referred to as boys and girls and must be given permission to speak. Infuriated by Black intellectuals, the racists in this film attempt to break them repeatedly. This notion that Black people are somehow inferior and that whiteness is a God- given birthright that affords them the authority to do whatever they see fit is prevalent throughout the film.

“Antebellum” is timely in addressing the unhealthy attachment to the confederate flag and the confederacy by way of claiming a connection to heritage; it’s a connection to hatred. This presents so many questions: Why do former plantations still exist? Why are tours given? Why are people still paying homage to the horrors of slavery? Why are Civil War reenactments still held? Why is the antebellum era, where whites were considered superior, still lauded and celebrated as heritage?

The film even brings attention to a statue of Robert E. Lee, a figure that has spawned a lot of controversy. Lee, like many other generals from that era, is honored as a hero for a war that the confederates lost and the US viewed as traitors. When the villainous white supremacists meet their fate, Julia tells Eden to “accept what you are… you are nothing. You ain’t nothing but a cotton picker. You think you’re better than me. You’re not better than me.” The evil that accompanies the blood thirsty desire to feel superior has forced generations of racists to create and live a lie. Their guilt is only assuaged by calling slavery ‘a way of life’.

Before the general dies he tells ‘Eden’, “we’re nowhere and everywhere”. A true statement — racism is everywhere, and so are racists.  Although the ending of the film could have been more climatic, the film will hopefully serve as an eye opener that the evils of racism are not just a thing of the past. “Antebellum” is currently available On Demand. Check your local listings for availability.

Horrors of slavery at center of Janelle Monae’s ‘Antebellum’