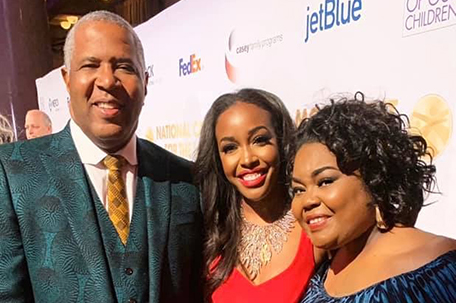 ABOVE PHOTO: Honoree and philanthropist Robert F. Smith with the public relations team

On February 8, a volunteer army from around the country converged in New York City for an annual summit at the behest of Susan L. Taylor, founder and CEO of the National CARES Mentoring Movement, which began in 2005.

Taylor’s goal each year has been to host the summit to thank the leaders who volunteer on behalf of children that are often found in the most trying circumstances in cities like Detroit and Chicago.

She also invites powerful national thought leaders, who impart key strategies for our own social and emotional growth.

The powerful two-day summit creates connections that are invaluable and tightens bonds, so that the leaders have each other to lean on for support and guidance as needed.

The culmination of those two days leads to the National For the Love of Our Children Gala held at Cipriani Wall Street, where money is raised to continue supporting the organization’s programs for another year.

The honoree this year was Robert F. Smith, the philanthropic man famously known for erasing the college debts of an entire graduating class at Morehouse College in 2019.

A grand night was had by all!