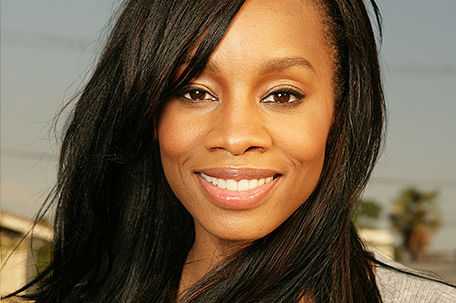 Tony Award winner Anika Noni Rose currently stars alongside Denzel Washington in the Broadway revival of A Raisin in the Sun. Her outstanding performance has not only earned her critical acclaim but also a Tony award nomination.

She recently starred as Whoopi Goldberg’s daughter in the made-for-TV movie, A Day Late and a Dollar Short. On the big screen, Anika starred as ‘Lorell Robinson’ in Dreamgirls which went on to receive an AFI ensemble award, as well as SAG award nomination for outstanding cast.

In addition, she voiced ‘Princess Tiana’ in the animated feature The Princess and The Frog, as Disney’s first African-American ‘Princess.’ The film received three Oscar nominations and Anika became the youngest inductee ever to be honored as a Disney Legend. Anika’s many film credits include: Imperial Dreams, For Colored Girls, Just Add Water, As Cool as I Am and Khumba.

No stranger to television, Anika most recently starred in the Hallmark special The Watsons Go to Birmingham and appeared on some of the highest-rated network shows such as CBS’s The Good Wife and ABC’s Private Practice. Furthermore, she guest starred on CBS’s Elementary and FOX’s The Simpsons (voice of Abie’s long lost wife).

Other TV credits include: the A&E mini-series Stephen King’s Bag of Bones opposite Pierce Brosnan, HBO’s The No. 1 Ladies’ Detective Agency for which she was nominated for an NAACP Image Award for “Outstanding Supporting Actress in a Drama Series.” And she received NAACP Image nominations for her work on Law & Order: Special Victims Unit, and on Hallmark Hall of Fame’s Mitch Albom’s Have A Little Faith, too.

Anika won the Tony Award for Best Featured Actress in a Musical for her role in Caroline, or Change. She starred in Deborah Allen’s Broadway revival of Cat on A Hot Tin Roof, opposite James Earl Jones and Phylicia Rashad.

Born in Bloomfield, Connecticut on September 6, 1972, Anika received her MFA from American Conservatory Theater and holds an honorary Doctorate from Florida A&M University. Here, she discusses her new film, Half of a Yellow Sun, co-starring Thandie Newton and Chiwetel Ejiofor.

Kam Williams: Hi Anika, thanks for the interview. I’m honored to have this opportunity.

Anika Noni Rose: Thanks so much, Kam.

ANR: I read the book when it came out, and I loved it! That book really excited me and moved me. And I read a lot! I remember thinking back then that it would make an amazing film. So, I was beyond thrilled when the call came asking whether I might be interested.

KW: I have a lot of questions for you from my readers. Editor/Legist Patricia Turnier asks: Is your character Kainene very close to the character in the novel or were a lot of liberties were taken in the script?

ANR: She’s very close to the character in the novel. I tried to keep her as tight to what Chimamanda [author Chimamanda Ngozi Adichie] described as possible. The only differences, I think, are the physical differences between our bodies, and there’s nothing I could do about that. [Laughs]

KW: Patricia also asks: Did you need a coach to capture the Nigerian accent? How challenging was it to sound authentic?

ANR: The answer is “Yes,” but the coach was British, because they mention in the book that she has an English accent.

KW: Was that the first time you visited Africa?

ANR: No, I’ve been to Africa many times. I spent six months in Botswana shooting The No. 1 Ladies’ Detective Agency. I’ve also been to Morocco and a bunch of other places. But it was my first time in Nigeria. It was intense and I loved it, but it was a lot of hard work, because we were bringing a style of shooting that country wasn’t familiar with. So it was really a learning set, and a learning environment, because the City of Calabar certainly wasn’t ready for what we were bringing. But everybody was welcoming and stepped up to the plate, and it was a great time.

KW: How was your shoot different from the ordinary Nollywood [Nigerian film industry] set?

ANR: I’m not very familiar with Nollywood. What I do know is that they’ll finish a film in two weeks. So, it’s a very different way of shooting a feature film. It’s a bit more labor intensive, and it’s a different film language.

KW: Harriet Pakula-Teweles says: The novel Half of a Yellow Sun tells a gripping, but often very gritty story. How does the film maintain the integrity of the story without potentially turning off the audience with visual details of the atrocities and suffering–especially given the stream of rather remarkable films like 12 Years a Slave, Hotel Rwanda and Django Unchained?

ANR: I think you’ll just have to see it, Harriet, to know how it affects and moves you. Anytime you depict war, it’s difficult to watch humanity debase itself in atrocious ways. But I think a good job was done.

KW: Attorney Bernadette Beekman asks: Did you read the N.Y. Times article about the super-rich 1 percent in Lagos? How do you feel about the kidnappings of hundreds of young girls in Nigeria? Do you feel that the issues addressed in the film from 50 years ago still have had a ongoing effect on Nigeria?

ANR: That’s a lot to answer. I don’t think the issues in the film were dealing with Boko Haram. That’s a completely different situation. In terms of the 1 percent, and the have’s and have not’s, the film does show some of that.

KW: Professor/author/filmmaker Hisani Dubose says: I’d like to know how long your journey has been to get where you are and how hard was the transition for you from Broadway to film?

ANR: I have been acting professionally since 1997. I didn’t feel that the transition was extraordinarily difficult, style-wise. The first film I did was not a great film, but I had a great time, and I learned a lot about things that were important to me, primarily, “Where is the camera right now?” and “What is the angle?” the big film I did was Dreamgirls, where I was lucky to be able to bring Broadway to the screen. But I did not feel like there was a huge difference between how I do what I do onstage and onscreen

KW: Editor Helen Silvis asks: How did you survive in New York without a job? What tip can you share for ambitious, aspiring actors?

ANR: I was sort of lucky because I was only unemployed for three months when I first moved to New York. What actors do, when they’re not working, is file for unemployment, because you’re sort of still working when you’re auditioning all the time. Once a play ends, you file for unemployment which will assist you while you’re pounding the pavement looking for your next gig. Hopefully, that next job will come through, before your unemployment runs out. And that’s the trick used by most actors. [Chuckles]

KW: Troy Johnson says: I had the opportunity to see you recently, during a presentation you and several other actors from the new Broadway production of A Raisin in the Sun which was hosted by WYNC in New York City.  What was the most interesting experience you’ve had so far doing this show?

ANR: Audiences seem to think of it as a black play, which it is. But it is also universal. What’s been phenomenal is having the lights come up at the end and seeing that the people moved by the play are from all different backgrounds. That proves the relevance of this piece today for everyone.

KW: Environmental activist Grace Sinden asks: You’ve had an extraordinary career in acting and singing. What has been your favorite performance to date?

ANR: Oh, I don’t know. That’s hard to say. It would be easier for me to say which I didn’t like, because there are so fewer to pick from. I loved Caroline, or Change, and Cat on a Hot tin Roof and doing Dreamgirls, but I haven’t gotten to a place where I can say “This is my all-time favorite!” because I’m not done yet. [LOL]

KW: Librarian Larry Williams asks: How did you feel when you won the Tony Award for Caroline, or Change?

KW: Larry would also like to know how you prepared for A Raisin in the Sun. Did you go to Chicago to get a sense of the neighborhood where it is set?

ANR: No, although I’ve been to the Southside of Chicago before. But this is a completely different time, so I don’t know whether a visit would’ve been more helpful than just looking at pictures from the actual period. I just read the script over and over, and watched a lot of interviews with Lorraine [author Lorraine Hansberry]. I listened carefully to what she had to say about her characters, and utilized that as much as possible. And I read her autobiography, too.

KW: In a recent interview, you said that you meditate before going onstage. Doing eight shows a week on Broadway, how do you keep up your energy? Is there a special diet or fitness regimen you follow?

ANR: Ugh! I try to work out regularly, but it’s difficult right now because it’s award season, and we have so many extracurricular things scheduled outside of the theater. When I’m on stage, I tend to drop weight, because your metabolism is so high. I eat regularly. I take care of myself. I can’t do a show without eating. I don’t want to end up skin and bones, so I’m sort of careful about that. I make sure I sleep as much as possible. Anybody who follows me on Twitter knows that’s a big challenge. [Laughs] Mondays are sacred to me. That’s the only day I have off. I used to go to the gym on Monday, but I don’t even do that anymore. I just want Monday to be a day when I can roll out of the bed when I feel like moving my foot and just let the day be what it is.

KW: What’s it like working opposite two great actors recently, Denzel in Raisin, and Chiwetel in Half of a Yellow Sun.

ANR: I’ve been lucky, because I’m working with a slew of great actors, LaTanya Richardson and Sophie Okonedo are also on the stage and Thandie Newton’s in the film. So, it’s been really wonderful and a great journey, because these are terrific people I enjoy working with.

KW: Does it ever make you nervous to hear that a certain celebrity is in the audience? Were you excited when the Obamas came to see Raisin?

ANR: I don’t like people to tell me who’s in the audience. It doesn’t make me nervous, but it will always affect a show and how you take in whatever’s going on around you. So, I never want to know. However, when the Obamas were there, the energy in that theater was fabulous. The audience was cheering before we even started. It was really invigorating! It had me jumping up and down backstage. We did a phenomenal show, and the Obamas came backstage during intermission, and they were just lovely..

ANR: Me! [LOL] A girl from Connecticut who’s living life, and trying to do the best she can, and who’s feeling blessed and full and striving!

KW: Well, I really enjoyed the film and hope to see you in Raisin soon, too.

To see a trailer for Half of a Yellow Sun, visit: http://montereymedia.com/images/half_of_a_yellow_sun_trailer.mp4