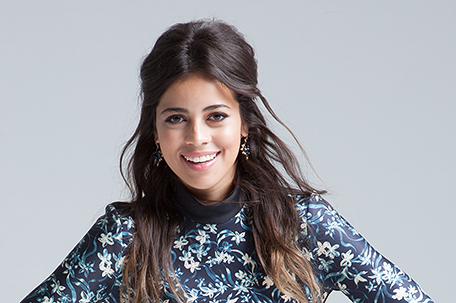 Angelique Rivera is a talented young actress who arrived in Hollywood and shortly thereafter landed her first major role starring in the second season of the critically-acclaimed, ABC drama, “American Crime,” created by Oscar-winner John Ridley. She stars on the series as ‘Evy’ who is central to the drama’s storyline as the only witness to a major crime. And she is joined on the show by an all-star cast including Regina King, Felicity Huffman and Timothy Hutton.

Rivera may be new to Hollywood, but she is no stranger to acting. She began performing at an early age and knew she had found her calling. Growing up in Kissimmee, Florida, she starred in her high school’s musicals as well as in local community theater productions.

Rivera graduated from the University of Florida in December 2014 with a Bachelor’s degree in Theatre Performance before moving to Los Angeles to launch her career. Away from work, she enjoys such activities as swimming, paddle boarding and yoga. She is a self-proclaimed foodie who enjoys cooking and exploring exotic cuisines, too.

Kam Williams: Hi Angelique, thanks for the interview.

Angelique Rivera: Thanks for having me, Kam.

KW: Congratulations on making a spectacular screen debut on “American Crime,” and on getting raves from Entertainment Weekly and others for your performance as Evy Dominguez.

AR: Thank you so much! It’s been such an amazing ride and I feel very fortunate to be a part of this show.

KW: Did you expect to make such a splash?

AR: No, not really, but it’s nice knowing that people are connecting to Evy. She is very special to me and I worked hard to make sure that I accurately portrayed her truthfully and authentically.

KW: Was there a special approach you took to the character that might have helped turn it into a breakout role for yourself?

AR: I really wanted to experience what her life was like. So, I volunteered at a learning center for students who come from low-income families. It was so eye- opening. I really got to know these kids and see the environment they lived in, because the center was located in their apartment complex. It really informed me about Evy and what her day-to-day life looked like. Also, seeing these kids with smiles on their faces, despite their circumstances, proved to me just how strong they are. I had a better understanding of Evy’s strength through that experience. Physically, I decided to inhabit Evy’s tomboyish ways in my life off set. I stopped wearing makeup, I stopped whitening my teeth, I grew out my eyebrows, I stopped getting my nails and hair done, and I wore baggier clothes. I felt like I needed to make being a tomboy feel more normal for me because I am naturally such a girly girl and I didn’t want to show up to set not feeling comfortable in Evy’s appearance. So I got used to it and then it felt like second nature.

KW: It probably helps that the series was created and written by John Ridley, who won an Oscar for the script of 12 Years a Slave.

AR: Oh yeah, that helps. [Laughs] To be honest, it’s hard to be bad when the writing is so good. It’s a gift for an actor to work with John and the team he has assembled, the writers, the directors, the crew, etcetera.

KW: You graduated from the University of Florida less than two years ago. How did you manage to conquer Hollywood so quickly?

AR: Well, the summer before I graduated I interned at a talent agency and that experience really prepped me for my big move to L.A. One of the agents gave me advice and told me one of the first things I needed to do was get a manager, someone to shape my career from the beginning. So that’s what I did. I set up meetings with managers before I moved to LA and met with Joan Green Management my first day in LA and then signed with them a week later. So, I hit the ground running and the rest is history. I had no time to waste and I’m so grateful to my managers for believing in me when all I had on my resume was college theatre and student films. [Laughs some more]

KW: Can you share a surprising development involving your character we can expect to see later in the season?

AR: John likes to keep things under wraps for the most part. However, I will say that Evy is going to be faced with a tough decision that could greatly affect Taylor’s case. She also will understand more of what Taylor has been going through because of something that happened to her at school with another boy.

KW: Besides acting, you also studied singing and dancing. Which is your favorite?

AR: Acting is my favorite, but singing is a close second. I love musical theater, because then I get to do both and throw some dancing in there too!

AR: West Side Story. Ever since I was a little girl, I always wanted to be Maria.

AR: I feel like people look at me and don’t see “bad guy,” but I would love to play a villainous character. I love to challenge myself by playing characters that are nothing like me.

AR: My family. They have always been supportive of me, my mom and grandma especially. They never missed a performance I was in.

AR: My family raised me in the Christian church. My whole family is Christian, so I’ve never known anything else. However, I’m not religious. To me, spirituality doesn’t come from a religion but from a personal relationship with God.

AR: My first job was as a character performer at Walt Disney World. I was “friends” with Princess Jasmine, Chip and Dale, Jessie, and King Louie. It was the best first job ever! I loved it.

AR: This past summer, I went on a camping road trip with my boyfriend, my best friend and her boyfriend. Our first destination was Lake Tahoe. We went to one of the lakes in that area and my boyfriend wanted to go cliff jumping off the rocks across the lake. The only way to go was swim or at least that’s what we thought. Mind you, this is not a small lake and the water is also freezing! I have no idea what we were thinking, but my boyfriend convinced me to swim across this lake with him. Half way through my boyfriend says we should turn back but I was like no we are going to finish it now. The current was strong and I ended up losing my bikini bottoms shortly after. It was literally like [the Discovery Channel’s] “Naked and Afraid.” There was a point where I thought I was going to drown and die because I was getting so tired from swimming. By the grace of God, we both made it across and I could not move I was so exhausted. I had to put on my boyfriend’s swim trunks and we ended up walking back around the entire lake to get back to our friends. You couldn’t pay me to get into that lake again.

KW: Wow! If you could have one wish instantly granted, what would that be for?

AR: I would wish for world peace. Cliché? I know but I think we desperately need it.

AR: The sunrise. The sign of a new day.

AR: Up in the hills, somewhere remote and quiet.

AR: A dolphin, hands down. I love to swim and to be in the ocean. They are also the smartest animals, other than humans, of course, and I think they are the cutest.

KW: Sure, why not? Judyth Piazza asks: What key quality do you believe all successful people share?

KW: Thanks again for the time, Angelique, and best of luck with the show.

AR: Thank you so much, Kam