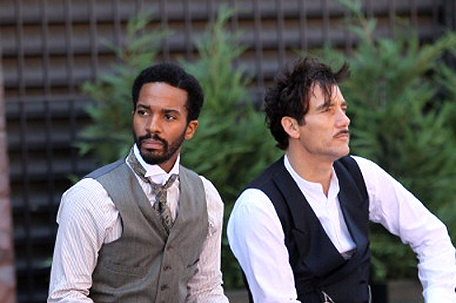 Director Steven Soderbergh may not be retiring after all; rather. Instead, he might just be reconsidering the medium in which he works, switching from feature filmmaking for the big screen, to producing content for cable TV, where he seemingly might be able to take more risks with the work he creates.

Soderbergh’s next project,  sees him teaming with Clive Owen on a TV series for Cinemax, titled “The Knick,” – a period series set in New York in 1900, at the Knickerbocker Hospital, where the hospital’s groundbreaking staff are intent on pushing the boundaries of medicine.

An official synopsis for the series, which indicates that there’ll be a few roles for black actors, including one seemingly prominent one.

“It’s 1900, when amazing technological advances are opening up the field of medicine to new life-saving procedures that would have been unimaginable a mere decade ago.  The Knickerbocker Hospital is an antiquated institution being dragged, sometimes painfully, into the 20th Century under the visionary tutelage of head surgeon, John W. Thackeray (Owen), a famously iconoclastic physician with a secret cocaine habit.  Thackeray presides over an organization in the grip of foment and change, from the high-minded principles of Cornelia Robertson, a shipping heiress bent on social reform, to the low scheming of such men as Herman Barrow, a hospital administrator more interested in graft than healing.  When Cornelia pressures Thackeray into accepting African American surgeon, Algernon Edwards, as his new assistant chief of surgery, the newly integrated hospital faces a whole new raft of challenges from its patients, many of whom would rather die than accept treatment from a man of color.  For the brilliantly innovative Thackeray, it’s just another distraction from his single-minded purpose — to initiate radical new procedures that will ultimately change lives, whether his patients hail from the highest corridors of power or the lowest tenements in New York…”

So, clearly, Algernon Edwards looks like it’ll be a prominent role for the black actor cast in it, Andre Holland. Holland, most recently joined the cast of Ava DuVernay’s upcoming MLK drama Selma, to play politician Andrew Young,

Other black actors that will feature in the series – whether in single episodes, or recurring roles, include Ghana Leigh, Rob Morgan, Markita Prescott, Ito Aghayere, Roy Nowlin, Deshane Granger, and Leon Addison Brown.