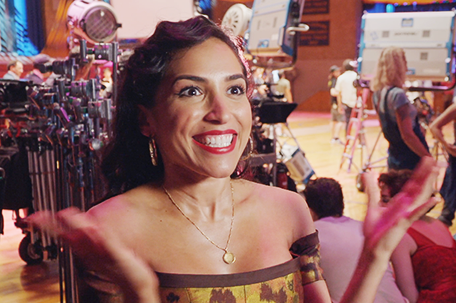 “I feel pretty, oh so pretty, I feel pretty and witty and gay. And I pity the girl who isn’t me today!”

These are lyrics that any fan of musicals will recognize immediately from the iconic “West Side Story.” The original Broadway production opened in theaters in 1957 and was adapted to film and released in theaters in the U.S. in 1961.

Isabelle sat down with The SUN to discuss her incredible journey in landing the role of a lifetime.

Isabelle initially found out about the role from her mother, who saw an announcement in the newspaper. She decided to travel to Puerto Rico to do her audition.

Months passed without Isabelle hearing any feedback after her first audition. The audition process continued, with Isabelle sending in several self-tapes. She was doing a stage production of “West Side Story” in Minneapolis playing Anita, when she was told about another casting with the entire creative team in Puerto Rico. Her audition tape from that casting impressed Steven Spielberg himself and resulted in the in-person audition that landed her the role of Rosalia.

“I took a screenshot of that email and I’m planning to put it in a frame,” Isabelle said. “When I read it I started yelling, I started crying, I called my mom and I’m like ‘oh, my God… I’m going to meet Steven Spielberg!’ I felt like no matter what happened at that point, this is a dream for me. “When I came out of that room after meeting Steven, after dancing — he was taking a closeup of me on his iPhone. He’s like ‘are you having fun?’ The fact that he talked to me — I felt so important. I was crying like a baby and my mom thought something was wrong. I said, ‘I just met Steven Spielberg mom!’ Thinking about it, I want to cry again. After that, I got the role.”

After several months of rehearsals, the film was shot and completed within 3 1/2. Isabelle shared how thrilled she is to be part of such an iconic and beloved story.

“I’m still pinching myself and realizing what this will mean for all of us,” she said. “It’s already changed my life in so many ways. There’s definitely an Ana Isabelle before “West Side Story” and an Ana Isabelle after “West Side Story.” The learning process has been so huge, and so was the motivation and inspiration that I have felt after shooting this film. First, because you’re working with legends and learning from them — you just want to follow their path so you can become something close to what they are.  Also, because you’re surrounded by an incredible cast. It was such a rich experience in every way.”

Isabelle also shared her thoughts on being part of a story that is rooted in love above all else, especially during a time where there has been so much turmoil surrounding race relations.

“I feel proud, and it’s a lot of responsibility,” she said. “As a young actor, woman of color and minority, I feel like there’s a lot of responsibility behind the art that I do. I don’t just want to be an actor, singer or artist because I want to be famous. To me, it’s more than that… it’s about having purpose. Having this movie coming out at this moment in history is such an important thing and an example for the new generation to understand how powerful love and empathy can be. It also shows how things can change when you choose hate over love, or criticism over respect. I feel proud and I feel like this movie is going to change the world.”

The singing, dancing, customs, and the heart of  “West Side Story” is incredible to see. The 2021 version breathes new life into this classic story and it’s a must see!

“West Side Story” opens in theaters nationwide on  December 10. Check your local listings for showtimes.