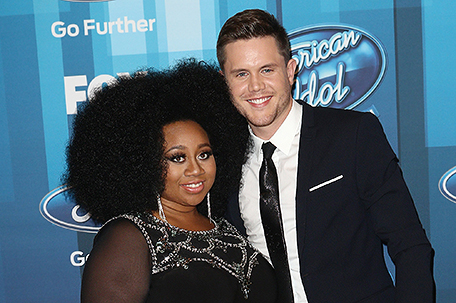 ABOVE PHOTO:  La’Porsha Renae, left, and Trent Harmon arrive at the “American Idol” farewell season finale at the Dolby Theatre on Thursday, April 7, 2016, in Los Angeles.  (Photo by John Salangsang/Invision/AP)

“American Idol” runner-up La’Porsha Renae is getting a crash course on celebrity and fame, after causing a big fuss over comments she made about the LGBT community.

During her post-show press run, the 22-year-old single mother from Mississippi said that she does not agree with the “lifestyle” of the lesbian, gay, bisexual and transgender community, but did call for others to respect them.

“This is how I feel about the LGBT community: They are people just like us. They’re not animals as someone stated before. They’re people with feelings. Although all of us may not agree with that particular lifestyle for religious reasons, whatever the reason is, you still treat each other with respect. Everybody is a human being. We should be able to coexist with one another,” Renae said.

The comment was in response to a question about her home state’s proposed “anti-gay” law that would allow businesses and religious groups to deny service to people who identify within the LGBT spectrum.

“I am one of the people who don’t really agree with that lifestyle. I wasn’t brought up that way. It wasn’t how I was raised. But I do have a lot of friends and a lot of people that I love dearly who are gay and homosexual and they’re such sweet, nice people. We should just respect each other’s differences and opinions and move on.”

Though her delivery seemed diplomatic at best, it wasn’t enough to prevent the major backlash she received online. Despite the public ridicule, the singer–who’s now signed to Motown Records–did not backpedal on her statements.

“We don’t have to agree with each other’s life choices to love/respect one another. Live and let live. #RENAETION #RespectThatWeAreDifferent,” she tweeted.