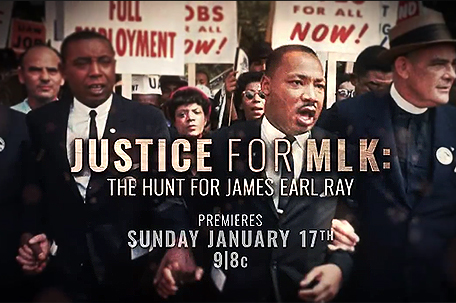 Silver Spring, Md.—The death of the Rev. Dr. Martin Luther King, Jr. was an event that shook the world, changed the face of America, and sparked one of the largest manhunts in the history of the FBI. This Martin Luther King weekend, American Heroes Channel (AHC) honors the life and death of Dr. King with a two-hour landmark television event, “Justice for MLK: The Hunt for James Earl Ray,” with never-before-revealed details about the hunt through new interviews with members of his tight inner circle and those involved in the investigation. Premiering Sunday, January 17 at 9/8c, this special follows local, federal and international investigators every step of the way as they partake in the ultimate game of cat-and-mouse to hunt down one of the most wanted men in history.

“The loss of Dr. Martin Luther King, Jr. devastated millions of followers and admirers – it was a turning point in American History and tragedy felt the world over” said Kevin Bennett, general manager, American Heroes Channel. “This blue chip special offers a poignant look at all the key players who rose to the occasion in these dark days to track down a killer who managed to stay one step ahead—and to finally bring justice to Dr. King.”

“The details and events of Dr. Martin Luther King Jr.’s assassination and the FBI’s manhunt have been obscured in myth and conspiracy theories. With this film we are taking an almost forensic look at the investigation that led the FBI to James Earl Ray. Viewers will see for the first time some incredible photography in the moments after the shooting, hear police dispatches and relive King’s final moments as told by those closest to him.  We are delighted to work with AHC to present new insights into one of America’s most remarkable leaders,” commented Kate Harrison, President, Cream Productions.

“Justice for MLK: The Hunt for James Earl Ray,” begins by bringing audiences inside Dr. King’s final days with key interviews with those closest to him—from Dr. Coby Smith, an activist and co-founder of The Invaders, to Georgia Davis Powers, Former Kentucky State Senator and a dear friend of Dr. King, offering never-before-shared insights into his mind and heart in the critical moments leading up to his shocking murder.

Following Dr. King’s assassination, viewers are in lockstep with investigators as they attempt to piece together the killer’s identity, how he got away—and where he had gone. The action takes place across a tense 65 day period following the most extensive manhunt conducted in that era—and one of the first to use forensic techniques—from Los Angeles, to Memphis, to Toronto, and finally to London. How did the killer get away, and escape capture for so long? In the two months after the hit, the killer eludes his FBI pursuers, but a succession of forensic clues and breakthroughs allows them to gradually build a profile of their man, establish his true identity as James Earl Ray, and finally track him down in the most dramatic climax.

Weaving together interviews with the first investigators of the case, including Vince Hughes, James Papia and EE Douglass from Memphis forces, with some of the foremost experts on the case like author Gerald Posner (“Killing the Dream: James Earl Ray and The Assassination of Martin Luther King, Jr.”), as well as James Earl Ray’s brother and attorney, “Justice for MLK” presents an original, suspenseful look at the crime and investigation that forever changed the course of history.

Online, AHCtv.com will be home to digital exclusive content including additional insights from the special’s interviewees, as well as exclusive archival material.