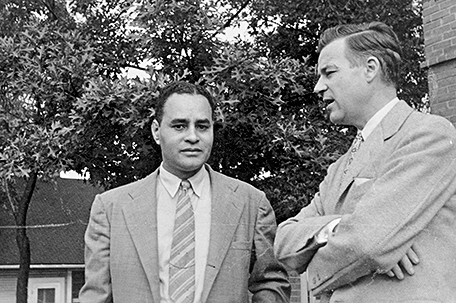 Gunnar Myrdal, was a Swedish researcher whose landmark 1944 study, An American Dilemma, probed deep into the United States’ racial psyche. The film weaves a narrative that exposes some of the potential underlying causes of racial biases still rooted in America’s systems and institutions today. An intellectual social visionary who later won a Nobel Prize in economics, Myrdal first visited the Jim Crow South at the invitation of the Carnegie Corporation in 1938, where he was “shocked to the core by all the evils [he] saw.” With a team of scholars that included black political scientist Ralph Bunche, Myrdal wrote his massive 1,500-page investigation of race, now considered a classic.  (Excerpted from PBS/Independent Lens)

Ralph J. Bunche, was an American political scientist, academic, and diplomat who received the 1950 Nobel Peace Prize for his late 1940s mediation in Israel. He was the first African American and person of color to be so honored in the history of the prize. He was involved in the formation and administration of the United Nations. In 1963, he was awarded the Medal of Freedom by President John F. Kennedy. For more than two decades, Bunche served as chair of the Department of Political Science at Howard University (1928 to 1950), where he also taught generations of students. He served as a member of the Board of Overseers of his alma mater, Harvard University (1960–1965), as a member of the board of the Institute of International Education, and as a trustee of Oberlin College, Lincoln University,and New Lincoln School.  (Excerpted from Wikipedia)

San Francisco,  – In 1938, the Carnegie Corporation commissioned Swedish sociologist Gunnar Myrdal to begin his landmark study of race and inequality in the United States. His question: How could a people who cherish freedom and fairness also create such a racially oppressive society? Published in 1944, “An American Dilemma” was cited in the Supreme Court’s Brown v. Board of Education decision to desegregate America’s schools. Seventy years later, Myrdal’s question continues to challenge America –- how do we explain the disconnect between what we believe and what we practice in what some have called a “post-racial” America? American Denial juxtaposes past and present, shifting from Myrdal’s investigation –- and his own personal struggle with denial — and current stories of racial injustice that are often overlooked in our national insistence on the preeminence of the ideals of liberty, justice, and equality. Directed by Llewellyn Smith and produced by Christine Herbes-Sommers, Smith, and Kelly Thomson, American Denial premieres on “Independent Lens” on Monday, February 23, 2015, 10:00-11:00 PM ET (check local listings) on PBS.

An intellectual social visionary who later won a Nobel Prize in economics, Myrdal first visited the Jim Crow South at the invitation of Carnegie Corporation in 1938, where he was “shocked to the core by all the evils I saw.” With a team of scholars that included black political scientist Ralph Bunche, Myrdal wrote a massive 1500-page investigation of race he called “An American Dilemma.” His study, now a considered a classic, challenged the veracity of the American Creed of equality, justice, and liberty for all by arguing that critically implicit in the Creed — which Myrdal called America’s “state religion” — was a nefarious conflict: the way for white Americans to explain to themselves why black Americans could not succeed in a nation offering equal opportunity was to view blacks as inferior. Myrdal argued that this view justified practices and policies that openly undermined and oppressed the lives of black citizens. But are we still a society living in this state of denial seventy years later, in an era marked by the election of the nation’s first black president?

American Denial sheds a unique light on the unconscious political and moral world of modern Americans. Archival footage, newsreels, nightly news reports, and rare southern home movies from the 30s and 40s thread through the story, as well as footage showing the surprising results of psychological tests of racial attitudes. Exploring “stop and frisk” practices, the incarceration crisis, and racially-patterned crime and poverty, the film features a wide array of historians, psychologists, and sociologists who offer expert insight and share their own personal, unsettling stories. The result is a unique and provocative film that challenges our assumptions about who we are and what we really believe.

Visit the American Denial companion website (http://www.pbs.org/independentlens/american-denial) which features information about the film, including an interview with the filmmakers and resources pertaining to the film’s subject matter.

About the participants, in order of appearance

Michelle Alexander is a longtime civil rights advocate and litigator. She won a 2005 Soros Justice Fellowship and now holds a joint appointment at the Kirwan Institute for the Study of Race and Ethnicity and the Mortiz College of Law at Ohio State University.

Danielle Allen is a political theorist at the Institute for Advanced Study who has published broadly in democratic theory, political sociology, and the history of political thought.

Mahzarin Banaji is an experimental psychologist and professor at Harvard University and Chair in Human Dynamics at the Santa Fe Institute.

Sissela Bok is the daughter of Gunnar and Alva Myrdal and a philosopher and ethicist.

Vincent Brown is a professor of history and of African and African American Studies at Harvard University and a multi-media historian with a keen interest in the political implications of cultural practice.

Kaj Fölster is the youngest daughter of Gunnar and Alva Myrdal and an author and political activist.

Walter A. Jackson is a professor of history at North Carolina State University.

Professor John A. Powell is Executive Director of the Haas Institute for a Fair and Inclusive Society (HIFIS) and Robert D. Haas Chancellor’s Chair in Equity and Inclusion at the University of California, Berkeley.

James Sidanius is a professor in the departments of psychology and African and African American Studies at Harvard University.

Sudhir Venkateshis professor of sociology, and a member of the Committee on Global Thought at Columbia University.