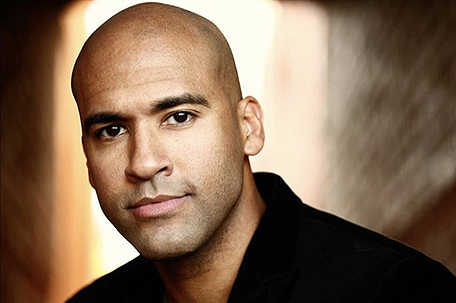 ABOVE PHOTO: Josh Tower stars as Aaron Burr in the national tour of “Hamilton”.

The brilliant composer and playwright Lin-Manuel Miranda has been adding his unique flair to Broadway for years. Inspired by the 2004 biography “Alexander Hamilton” by Ron Chernow, Miranda created his own account of history through hip-hop with “The Hamilton Mixtape.”In 2009, he performed a rap he created about Alexander Hamilton for the White House’s Evening of Poetry, Music, and the Spoken Word.  That performance led to the innovative show we’ve come to know as “Hamilton.”After receiving rave reviews during its off-Broadway debut at The Public Theater in 2015, “Hamilton” debuted on Broadway at the Richard Rogers Theater in August 2015. In 2016,  the play broke records with 16 Tony nominations and 11 Tony wins, including Best Musical, a Pulitzer Prize for Drama and a Grammy for Best Musical Theater Album.

Ambler native Josh Tower plays Aaron Burr in the national tour of “Hamilton.” He spoke with the SUN about his journey, performing in his hometown and the significance of having this story told by a diverse cast.

Tower’s love for music was ignited in chorus and continued from fifth grade on. He attended Upper Dublin High School, where he was also an athlete. After getting out of the service, he attended Montgomery Community College before transferring to Temple University to study acting. After graduating from Temple, he received his MFA in acting from UNC Chapel Hill, where he studied classical theater. Tower landed roles in “Ragtime,” “The Lion King,” and “Motown” before joining “Hamilton.” He shared the process that led to him becoming Aaron Burr.

“As luck would have it, when this was a workshop, I auditioned for the role of George Washington when my friend Chris Jackson, who originated the role, couldn’t do it,” Tower said. “I was one of the originals in one of the first workshops before it went to The Public Theater.”

“Fast forward to four years later, they asked me several times to come in for George Washington again,” he continued. “After the fourth time, and not getting it for whatever reason, you never know, there was something I was not connecting with.  I had a talk with my agent and said, ‘if they call again, tell them I’m not coming in for George Washington. They can either hire me or not, it’s ok.’ But I said, ‘if they ever want me to come in for Burr, I would be really interested.’ I hear nothing, nothing, nothing, and then finally I get a call asking would I like to come in for Burr and I said absolutely. … the rest is history.”

Although many would like to paint the character Aaron Burr simply as an antagonist, the character  is layered and offers much more than villainy to the show.

“Burr, like Judas in “Jesus Christ Superstar”, is perceived as a bad guy, especially in this climate that we’re in with guns,” Tower said. “He certainly is the one that shoots Hamilton and kills him, but duels were very common back then as an accepted form of settling a dispute. Squeezing a trigger just takes a second… but I always wondered in that split second, what was going through Burr’s mind, and no one will ever know.”

“I don’t think that he’s a bad guy, I think he is misunderstood throughout history,” he continued. “Being involved with the founding fathers on the periphery and being the second vice president says a lot about him. People voted for him and liked the guy. He was eloquent. They often said what took Hamilton two hours of very colorful speech to get out, took Burr 30 minutes. He was very precise and very clear.  He’s a complicated amazing character to play!”

Many who haven’t seen “Hamilton” may suspect that the acclaim is hyperbole. Simply put, it isn’t. Tower shared his thoughts on why the show resonates with so many.

“Even though “Hamilton” has become a commercial success, it was originally supposed to be a mixtape,” he said. “It was set up so that the music was very radio friendly. The sounds are very contemporary, layered against the backdrop of history and the revolutionary time period of 1776. So, I think that’s very attainable for audiences.”

Additionally, Lin-Manuel Miranda and his creative team have also gone to great lengths to make the show affordable for everyone.

“Those schools are given a course packet where students learn about the history of the show, the period and then they create a piece,” Tower continued. “Ten to twelve of them are chosen and the kids perform them on stage… then we perform the show for them. A lot of those young kids are not going to be able to afford to see this show. With [that] happening, they really do have in mind getting the show out to people who can’t come to New York. Even just taking the show on tour, we’re bringing the show to people’s backyards.”

“Hamilton” — in its presentation and with its success starring a cast of color — has dispelled stereotypes and broken down barriers. The beauty of the play is that it gives actors of color a chance to tell a story that they are often excluded from telling.

“I think that it’s amazing to be ambassadors for a show like this that also has a very wide casting net “ Tower said. “What they’re seeing on stage is really a reflection of what America is right now… it’s everybody. There’s no prescribed Hamilton has to be Black, White, brown or yellow… it changes for every company.”

“Hamilton is one of the few things that I’ve ever been involved with that casts with such a wide net,” he continued. “Some nights Eliza is Korean; Hamilton, (Edred Utomi,) is a first generation American, with African parents, and their son is Filipino. Here’s the point — our forefathers were immigrants, they weren’t from here. We’re just translating that immigrant imprint into a contemporary look, and that contemporary look is non-White people.”

Words fall short of truly expressing the brilliance of “Hamilton” and the invigorating experience it gifts its viewers. The masterfully crafted soundtrack that combines rap, hip-hop, jazz and showtunes is a fusion that offers something for everyone. Tower shared his hopes for audiences.

“I think audiences will get a little bit of a history lesson,” he said. “It’s kind of faction. Most of it is fact, but some of the timelines and characters have been pushed together, like the Sons of Liberty. I hope people see the reality of the fabric of the country as it exists.”

“As they are looking at our show, we’re looking at them and it really is the same picture,”he continued. “I’m uber proud to come to my hometown and be an ambassador for this show and share it with the City of Brotherly Love. A lot of the history happened right there. …ultimately, it’s just a good story with some music and some history.”

“Hamilton” will be at The Forrest Theatre now through Sunday, November 17. Visit: https://mtc.telecharge.com for more details on tickets and showtimes.

Get your tickets while they last — “Hamilton” is unforgettable.