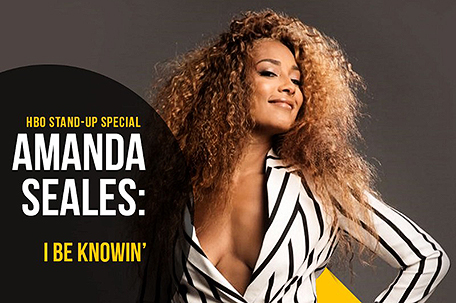 Taped at the Edison Ballroom in New York City, the exclusive presentation was directed by Stan Lathan and produced for HBO by Jesse Collins Entertainment.

The special will also be available on HBO NOW, HBO GO, HBO On Demand and partners’ streaming platforms.

In “Amanda Seales: I Be Knowin’”, she delves into catcalling versus compliments, a woman’s “vagenda,” who runs the windows on an airplane, workplace email etiquette and how to be a “Hannah” instead of a “Becky,” and leads the crowd in a rousing rendition of the Negro National Anthem.

“Being a stand-up comic is an honor I don’t take lightly, because I consider humor to be a superpower that allows us to bear the weight of issues and concepts that otherwise seem so much bigger than us,” said Seales.

“Amanda Seales: I Be Knowin’” is 37 years of finding the funny, culminating in an hour, and my HBO family being the place where I get to share it, makes this, my first special, even that much more special.”

A series regular as Tiffany on “Insecure,” Seales is currently touring with “Smart Funny & Black,” the live comedic competition show she created.

A former MTV VJ with a master’s in African-American studies from Columbia University, she has guest-starred on “black-ish,” written, produced and starred in two seasons of her scripted web comedy series, “Get Your Life,” and hosts her weekly podcast, “Small Doses.”

“Rock and a Hard Place”, a powerful look inside a youth prison boot camp, debuts March 27, exclusively on HBO