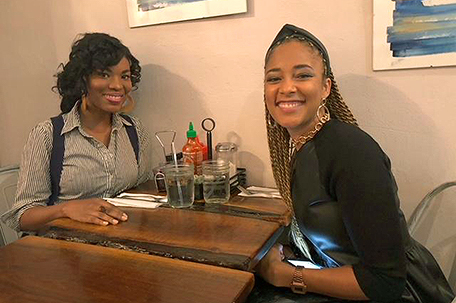 On an unseasonably warm fall morning, Amanda Seales sat quietly at a table in Luna Café. The multitalented, multi-hyphenate visited Philadelphia after her speaking engagements at Arcadia University and the University of Delaware. Many know Seales from her role as Tiffany DuBois on HBO’s “Insecure,” which is just one of many highlights in her career thus far. Known for speaking truth and making people laugh during those teachable moments, Amanda Seales continues to balance her various gifts with grace and stamina seamlessly.She offered a transparent glimpse of her journey thus far and the many projects on her horizon.

To say that Seales is very accomplished falls short of the full scope of her achievements. She wears many hats including but not limited to: comedian, writer, producer, host, and content creator. While navigating her way through the entertainment business, Seales began acting as a child, landing a part in “Cop and a Half” and the role of Deonne Wilburn in Nickelodeon’s “My Brother and Me.” She later became a VJ on MTV, toured with R&B group Floetry, became a spokesperson for numerous campaigns, and continues to create hilarious original content.

In addition to notoriety, the Amanda Seales brand has become synonymous with creativity and candor. In an industry and society that doesn’t always welcome truth with open arms, Seales has remained unapologetically outspoken and rooted in who she is. She shared her perspective on the importance of speaking her mind.

“I know for me, it wasn’t like I started getting these things and then started speaking my mind…” Seales said. “It was from speaking my mind that I started to see my career turn around. It was because I made a decision that I wasn’t going to try to cross over. I was going to break through and be as Black as I want it to be. Once I decided to not cater to the people that make decisions, it was almost like that’s what needed to happen.” She added, “Realistically if I’m being perfectly honest, it just comes with the more examples you get [in] your gut being right, the more solid you get in planting your flag in that. Just as much as people have faith in God, faith, and religion, you have to have faith in yourself. So even before those examples start coming, you have to have a certain level of faith in knowing what you’re saying is what needs to be said… and then going out in that faith in you.”

Seales’ unwavering determination, innovation, and work ethic continue to yield results. Sometimes in order to accomplish certain goals, one has to create a lane of their own and Seales did just that with her web series, “Get Your Life.”The web series, which she wrote, directed, and produced, was originally on www.blavity.com and was later added to Issa Rae’s YouTube channel. Seales stated “Get Your Life” was so much about taking the bull by the horns. I wanted to create something that was really in my voice, that also added to another space to see a different black woman narrative.” Seales followed a similar blueprint with her monthly live comedy show “Smart, Funny & Black,” which tests the participants’ knowledge of Black history and culture. She reflected on the catalyst for creating the show. “For a long time, I feel like blackness has been represented as a monolith and that’s part of the impetus behind ‘Smart, Funny & Black.’ I wanted to create something that broke open this notion of Black comedy only existing in one way. ‘Smart, Funny & Black’ is something I just believe in whole-heartedly. I believe in its ability to celebrate black culture. I believe in its ability to educate not only Black people, but everybody on the many contributions black people have made to this country and also our experience.

It’s a Black pop culture gameshow, but throughout the games there’s so much information shared in humor and wit and it’s a safe space for black comedy which we haven’t had in awhile.” Seales also recently shared some of her pearls of wisdom with “Harper’s Bazaar” in an original eight-episode series called “Gem Dropping.”

Thankfully, we are beginning to see a more diverse representation of ourselves on both the big and small screens. Seales will be returning as Tiffany in season three of “Insecure.” On playing the role of Tiffany, Seales said, “We are both very honest… we’re truth tellers. I think this season I got to be more of that in a genuine way that wasn’t stank. I’m excited to see more… it’s always exciting to see what the writers come up with and what road they’re going to take you on.”

One thing is very clear, Amanda Seales is continuing her path on the road to greatness. After a gentle push from her fans, Seales will be launching her podcast  called “Small Doses: Potent Truths For Everyday Use” in December. She describes it as, “Self-help from the hip. It’s like my Instagram, but in a longer format with a different theme every episode.”  “Get Your Life” season one and the new season two, will also be available on Amanda Seales’ YouTube channel in early December.

Additionally, Seales is working diligently towards bringing “Smart, Funny & Black” to television and recently signed a book deal. So what’s next for Amanda Seales, a modern day Renaissance woman? You’ll have to stay tuned to see! Follow her journey @amandaseales on ig, and Twitter, Amanda Seales on YouTube and Amanda Seales TV on Facebook.