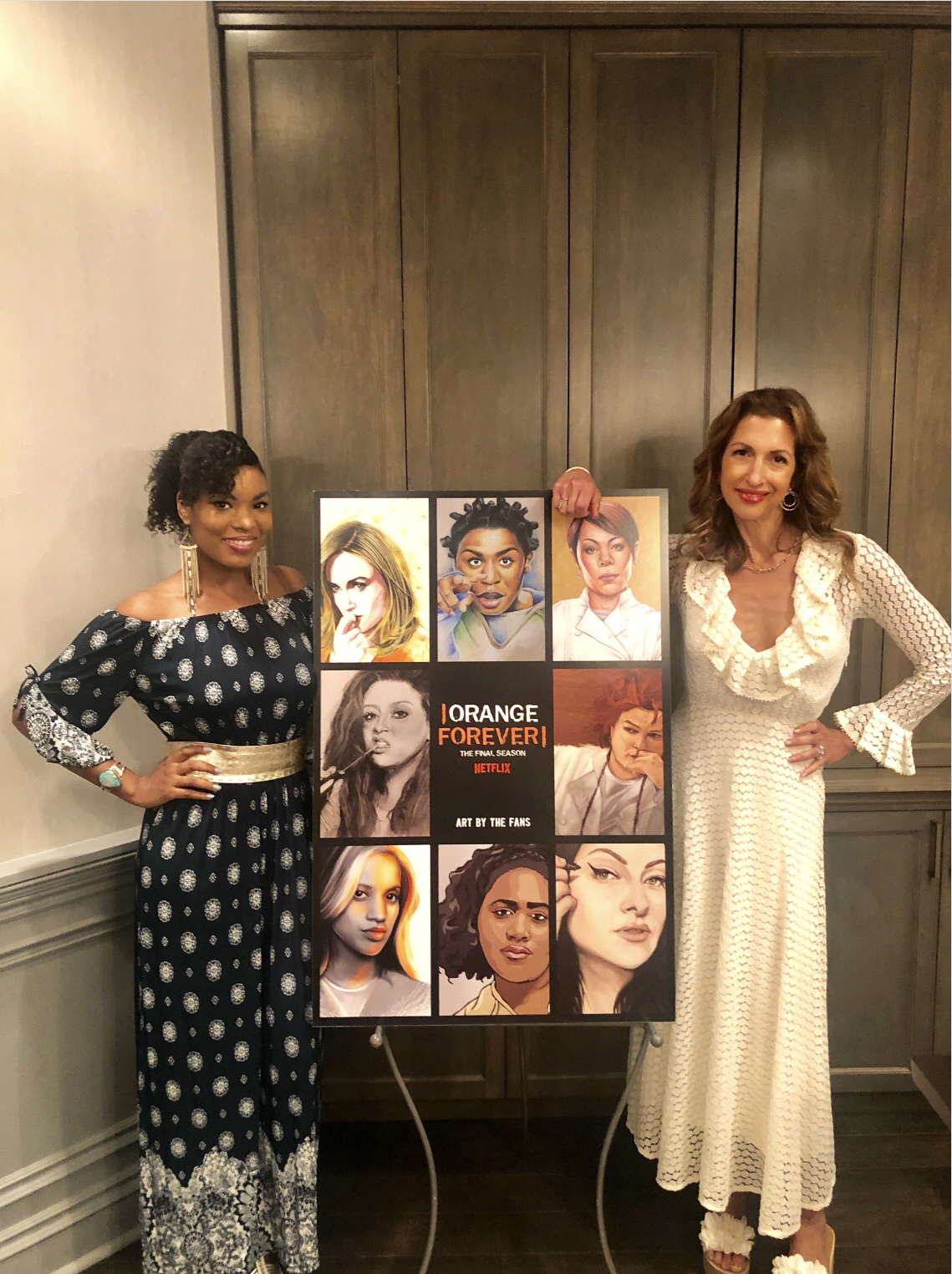 When Netflix’s “Orange Is The New Black” premiered in 2013, it quickly became a fan favorite and garnered a cult following. Based on the book “Orange Is the New Black: My Year in a Women’s Prison” by Piper Kerman, the story follows the lives of the women at the fictional Litchfield Prison in New York. These women, who have been uprooted from their families and separated from everything they know to be normal, are thrown into harsh conditions during their attempt to pay their debt to society. After six extremely successful seasons, “Orange Is The New Black” is back for its seventh and final season. Alysia Reiner, who plays the hard as nails assistant warden Natalie “Fig” Figueroa, came to Philadelphia to talk about her years of working on this show.

When Fig was introduced to the world, the audience almost immediately recognized her as a villain. She’s extremely manipulative and void of any empathy, in most cases. Her only concern is the prison, not the inmates. Reiner embodies Fig so seamlessly that she quickly became a character fans loved to hate. When Reiner first met the character Fig, she had no idea what was in store for her.

“I think quite frankly in the beginning that scared me a little bit,” she continued. “To get deep for a second, my parents fought a lot when I was little and I’m pretty conflict averse. I’m not a yeller or a fighter; I’m more of a fixer, a placater, and a ‘want everybody to like me’ person. So, it was scary playing this human and a huge challenge for me, but I was willing to go there. It was funny in the first season when I would start to get recognized, because people would be like, ‘I love to hate you’. I think I learned to embrace that there’s something lovable about being strong.”

Throughout the seasons we’ve seen Fig grow from the antagonist to a character with a lot more than meets the eye. Fans of Fig can look forward to seeing even more depth from her character in the final season.

“One of the things I love most about being on this show, is getting to grow with this character and that audiences have been able to see so many different parts of her,” Reiner said. “The truth is we all have so many different sides. You can meet someone in a day, and the person that’s standing in front of you is just a tiny facet of who they are. There are so many layers that you’ll never see.

“ The joy of being on a show like this for seven years is you get to see more layers… more of the onion skin gets peeled off, and it’s true of every character on the show,” she continued. “You see so much more of everybody over these seven years. It’s my deepest hope is that in doing so you remember that when you meet that person today, you’re just seeing one piece of them and perhaps give them a chance because you don’t know what pieces you’re not seeing and how beautiful they may be.”

Not only are the characters of “Orange Is The New Black” complex, the ensemble cast is also among one of the most talented and diverse in the history of original television series.

“It’s such a deep privilege to work with this cast,” Reiner said. “There’s so much talent in our cast and so many spectacular human beings and activists. I love them very much and I’m proud to be part of this cast… it’s been a true joy. One of the other deeply unique things about this show is the ability to show such an outrageously diverse group of humans, be it in the color of people’s skin, or their culture, or their gender and sexuality… it’s just a true melting pot.”

Audiences continue to be drawn to “Orange Is The New Black” because it doesn’t shy away from confronting truth. This season’s content really dives deep into what’s currently happening. It addresses everything from the corruption of the prison industrial complex to immigration. Reiner shared her thoughts on the show’s candor.

“From the moment I got this job, I felt like it was an opportunity to educate people and educate myself more and use it as a jumping off point to be a spokesperson for some of the organizations that help change those things,” she said., “Be it the Women’s Prison Association or Still She Rises, which I’m on the board of — it’s based in Tulsa, Oklahoma and specifically helps mothers in prison.”

“With immigration, just to be talking about what’s going on in our country right now is the biggest gift that there is!” she continued.”I think unless we talk about it, unless we shine a light upon it, unless we make people so angry and upset about it that they stand up and take action about it… nothing is going to change, and we do need to take action.”

After spending the past six years working on “Orange Is The New Black” alongside her incredible cast, Reiner shared her feelings about the show coming to an end.

“It feels great, but it’s a super complex mix of emotions — excitement for people to see it and experience it all with us — and of course, grief that it’s ending.”

“I think there are people that fell in love with it and watched every episode of every season, and then there are some people that dropped off, “ she continued. “But I think everyone is going to tune into Season seven. We actually dropped a five-minute summary of the entire six seasons, so you’ll be ready if you want to start watching again.”

Although “Orange Is The New Black” is coming to an end, Reiner is staying busy and has several new projects her fans can look forward to seeing.

“I just finished season three of “The Deuce” and we start season four of “Better Things” in October,” she said. “On Friday, I start a workshop for a new play, so thank God, it’s busy and happy.”

Be sure to follow Alysia Reiner on all social media platforms @alysiareiner. “Orange Is The New Black” the final season is now available on Netflix. Get ready for the amazing ride that is season seven… you don’t want to miss how it all ends!

The Bridge: A Black Holiday Season