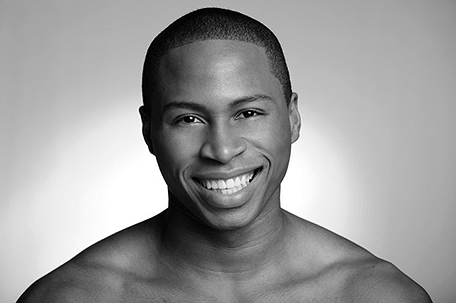 Brooklyn native and current resident Bozeman has been recognized nationally and internationally for his talent.  The New York Times praised his work describing his dancing as “velvety fluidness.” Some additional accomplishments include touring internationally with The Broadway musical “Aida,” and a gold medal from the NAACP ACT-SO Competition in Dance.  Although Bozeman is no stranger to accolades, he is also no stranger to adversity. After auditioning five times, he became a member of his dream company Alvin Ailey in 2013. Bozeman spoke openly about his journey and the reason why he wants to inspire others. “I think with the current climate of the world, there are people out there still trying to fight for change and positivity. I try to focus on purpose, shedding light, cultivating the greater good in people, and cultivating the next generation of people.

I just want people to know that whatever your dreams are, they’re possible… it just requires hard work. If you submit to your dreams, you have to be unconditionally invested in doing the work.” Bozeman said, “I’m really big on giving back and that’s something Mr. Ailey was big on too. He believed that dance came from the people and should be delivered back to the people.” Bozeman continues in Alvin Ailey’s footsteps of uplifting others both on and off the stage. He recently released a book entitled “The Power of Determination” to aid in his efforts to give back. He describes the book as “fourteen different stories of people overcoming adversity and obstacles.” “The Power of Determination” will be distributed to students in departments of education, juvenile detention centers, and the incarcerated throughout the country.

Alvin Ailey American Dance Theater is known for its diverse repertoire and styling. Philadelphia dance enthusiasts can look forward to seeing the following pieces; Boykin’s “r-Evolution; Dream,” a ballet inspired by the sermons and speeches of Dr. Martin Luther King Jr.; Kyle Abraham’s “Untitled America,” which addresses the American prison system; “Exodus,” choreographed by Puremovement’s Rennie Harris and Alvin Ailey’s legendary piece, “Revelations.”  Bozeman shared his thoughts on working with the phenomenal aforementioned choreographers and the importance of using art as a tool.  “Nina Simone said it best, as artists art should reflect the times. As artists on any platform… our art speaks and reflects what is happening in the world.

I think it’s beautiful that that we have pieces that speak about current events like social injustice. I feel honored that I get to work with choreographers and be apart of their dream, creation and voice.  I am only a vessel. I just want to make sure that through me, people understand the message in it’s purest form, in the way that that the choreographer intended for the audience to feel… that’s my goal,” he said.

The Alvin Ailey American Dance Theater will be performing at The Merriam Theater for two days only on February 3rd and 4th.  This is a show you do not want to miss! Visit https://www.kimmelcenter.org/pdp-pages/201617/kimmel-center-presents/alvin-ailey-american-dance-theater/ for more information on tickets and showtimes.

Angela Dunlap’s hit stage play “Why Do Good Girls Like Bad Boyz?” this fall at the Merriam Theatre

Controversial film about Mumia Abu-Jamal and the Daniel Faulkner killing, Tigre Hill’s “The Barrell of Gun” premieres Sept. 21 at the Merriam Theater