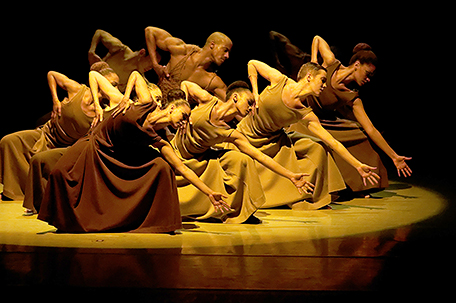 When artistic dance and sheer artistry comes to mind, Alvin Ailey is at the top of that list.  Known as one of the most revered professional dancers of all time, the Alvin Ailey Dance Theater is known for excellence.  This past weekend brought the return of the Alvin Ailey American Dance Theater to the Academy of Music for their 60th year anniversary.

When the show was last here in 2017, it sold out and it is clear to see why.  Three performances over two days had the troupe busy entertaining longtime followers and newbies alike.

Between the light display from the set design, to costumes and music, this show was a complete work of artistry.  Under the vision of choreographer Rennie Harris, a Philadelphia native, the world premiere of Ailey’s two-act ballet “Lazarus” came to the stage, with the pure athleticism of the troupe enticing the audience.  The ballet featured racially charged themes spanning from the 1950s to present day.  Watching the dancers weave on and off the stage and around each other was magnificent.  Blinking was almost impossible as there was so much to be displayed through each performance.

Saturday’s edition of the show featured “En” choreographed by Jessica Lang, which dealt heavily with the concept of time, and “Ella,” a lovely homage to the famous jazz singer Ella Fitzgerald, choreographed by Ailey artistic director Robert Battle.

Ailey’s “Revelations,” his renowned signature piece closed the show, and featured dancers dressed in various shades of brown cloth moving methodically along with old negro spirituals calling the ancestors into the space as well as a section dedicated to baptism and the cleansing of the soul.  Since “Revelations” first premiered in 1960, audiences worldwide have been moved by this profoundly beautiful piece.  Throughout each piece, standing ovations were given to the troupe.  The audience was captivated by the performances the dancers presented, leaving everyone anticipating Ailey’s next visit.  Ailey’s legacy proudly lives on for hundreds of dancers to perfect their craft and audiences worldwide to admire black culture brought to center stage.