“All The Old Knives”: A review 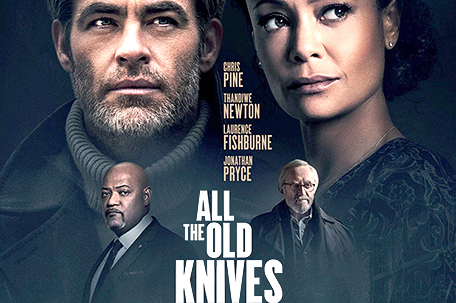 Betrayal is one of the worst aspects of the human experience, be it professional or personal. When it comes to work in the CIA however, there is absolutely no tolerance for betrayal.

In Amazon’s original film, “All The Old Knives,” Henry Pelham (Chris Pine), a veteran operative is assigned to find the mole within his former unit that is responsible for the deaths of all of the people aboard Royal Jordanian Flight 127. The possible suspects are his former co-workers at the CIA’s Vienna station. Directed by Janus Metz Pederson, with a screenplay by Olen Steinhauer, the all-star cast includes: Thandiwe Newton (Celia Harrison), Laurence Fishburne (Vick Wallinger) and Jonathan Pryce (Bill Compton).

“All The Old Knives,” adapted from Olen Steinhauer’s novel of the same name, opens in 2012 inside the cabin of Flight 127, which is being hijacked. After dragging a dead woman’s body through the aisle of the plane, the hijacker says directly to camera, “Now is the time we send our message… you brought this upon yourselves. We speak for all victims around the world.”

The timeline then switches to present day, eight years later, with Vick (Fishburne) and Henry (Pine) rehashing the details of the devasting loss of Flight 127. During that conversation, Vick reveals that the lead hijacker was detained three weeks prior. Vick also informs Henry that the hijackers were connected to a mole inside the CIA’s Vienna station. Embarrassed by the high-profile incident, the CIA is still dedicated to discovering the identity of the mole responsible. Henry asks Vick to assign him to the task — a hidden agenda which is later revealed.

During his quest for the truth, Henry travels from Austria to England to California. First, Henry interviews Bill Compton (Pryce), a retired former member of his team who currently resides in London. During his visit to Carmel-by-the-Sea in California, Henry is reunited with another CIA operative, his former colleague and ex-lover Celia Harrison (Newton). Sparks fly over dinner as the two talk about old times through a series of flashbacks. They begin their dinner with a toast from Henry — “to old friends.” Celia responds with, “You can do better than that,” to which Henry replies “to old lovers.” Their passion is still very present despite the fact that time has forced them to move forward without one another — Celia is now a married mother of two.

During their conversation, Celia and Henry finally discuss the end of their relationship and why she left him in Vienna immediately following the aftermath of the hijacking. As it turns out, both Celia and Henry are trying to get to the bottom of who is responsible for the hijacking. Celia and Henry play coy as they each attempt to excerpt information that will lead to the revelation of the mole.

The revelation of the truth however, is devastating betrayal. In Celia’s attempt to protect herself, she betrays Henry. It is then revealed that Henry’s involvement in the hijacking was done to protect Celia from harm.

“All The Old Knives” is a brilliant take on the ways that both espionage and love are wildly unpredictable. Pine, who also serves as executive producer of the film, brings mystery, charm and an allure to his character that is very enjoyable to watch. Additionally, the chemistry between Pine and Newton is undeniable, making the ending that much more heartbreaking. “All The Old Knives” serves as a reminder to ask the hard questions from the people you love and to offer grace in the place of doubt. Old wounds can often be the most difficult to heal — similarly old knives can be just as sharp… and deadly. The film will appear in theaters and on Amazon Prime on April 8.

“Judas and The Black Messiah”: A Review